We got the keys to our town house the day after we arrived in HK and we have since been working feverishly to get things done in order to get settled as quickly as possible before the boys start school.  That has meant sleeping on the floor for a few nights until our furniture arrives, and trying to get creative with the microwave as a means to cook meals (yeah, that doesn't work so well).  From getting groceries to shopping at IKEA to riding a public bus, every day this last while has provided some sort of learning experience for us.

After the excitement of getting the keys to the town house, we spent an afternoon at IKEA, looking for beds and a couch and a slew of other things to make the house livable. In ways, it was fun to be starting fresh, but it was also daunting.  Jason was so worn out from the experience that he fell asleep on one of the display beds!

The IKEA we went to was at the MegaBox mall, which is literally, a gigantic big red box of a building with 19 (yes, NINETEEN) storeys of shopping in it!  We didn't even come close to seeing the entire contents of it -- I was exhausted just getting up to the 4th floor where IKEA was because of the way the mall was laid out.  We would go up one escalator, then have to walk to another part of the floor to find the next escalator up, and so on.  We have found this to be a common layout in most of the malls we have gone to, and it's kind of annoying when all you want to do is just get up to (or down to) where you want to go! 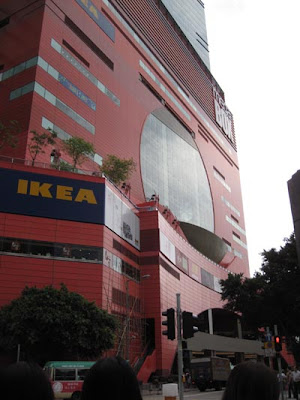 Speaking of malls, people are really into them here.  There are literally malls everywhere...I think there are more malls than schools.  And they are always busy and crowded, which just baffles the mind.  Many malls are also attached to the MTR (subway) train stations, so you can literally go from one mall to another and never see the light of day.  You can go shopping for a pair of designer shoes while heading to your connecting train to get to work!

Another thing we've learned (education is ongoing at this point) is that you can have almost anything delivered to you relatively inexpensively.  Of course, we never once considered carrying a dining room table and chairs on the train station no matter how compact IKEA packaging is, but we were surprised that our delivery cost about $25US.  And that was for our entire order of furniture which included beds and mattresses and a dining table and chairs and a couch and several household items.  Yes, the delivery people might not speak a shred of English, but it's still just $25!  I don't think we would be able to get a single mattress delivered for $25 in San Jose.

Groceries can be delivered for free with a minimum order of about $64US.  Ordering groceries online and having them delivered is the norm here, mainly because no one wants to be hauling packs of toilet paper and bottled water on the trains.  And no, the grocery stores here are not Trader Joe's or Whole Foods or Costco (all places I miss terribly), but they offer a half-decent selection and I can't complain when my groceries just show up at my doorstep. If I place my order by 10am, I can even get them delivered to me that same afternoon.  Very cool.

Nothing to do with shopping or delivery, but still an interesting point -- we found out that just because you're standing at a bus stop waiting for a bus does not mean a bus will stop for you.  The bus driver will keep on driving unless you actually wave to him to indicate you need a ride.  It took us watching 3 buses drive by us and a guy who knew the bus protocol before we figured out what the issue was.  The bus driver will also not stop at a bus stop unless you yell at him that you want to get off.  There is no pull cord that triggers a nice "ding" sound.  You just have to yell out loud enough for him to hear, to which he will give a slight wave to acknowledge that he heard you.  The commonly seen "mini" buses also only have 16 seats and there is no standing on the bus whatsoever, so if the seats are full, you can't just squeeze on.

I can't say the same for the subway trains where you can literally be packed into a train like sardines at certain times of the day, with nowhere to sit or barely a bar to hang onto.  If it's crowded enough, you can't fall down anyway because everyone is packed in so tightly!

Finally, one last thing worth mentioning is wet markets.  I'm not exactly sure why they are called wet markets, but basically, they are places where you can buy fresh food...really fresh.  Maybe it's because the floors are wet because they're always being sprayed down.  I have no idea.  Anyway, we went to one called Tai Po Hui Market, which is about 10 minutes from our place, in the main part of town.  In this non-descript building, we found fresh fruits, vegetables, fish caught recently, meat that has just been cut -- it was quite an amazing sight to behold...and smell. 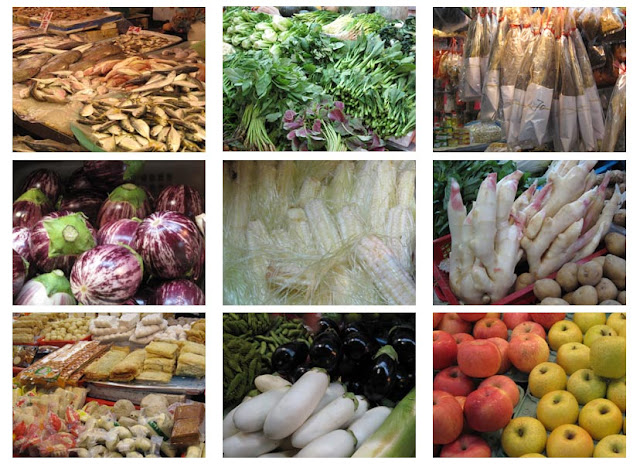 Wet markets are apparently the best places to get a wide variety of cooking ingredients fresh and cheap.  One of my favorite things to do when visiting a new place is to go to the store or market where the locals buy their food, just to see the variety and the prices, and the wet market did not disappoint.  The boys had a great time pointing out all the different fruits and vegetables they hadn't seen before.  We saw baby corn with the silks still on them (not in a can!), giant fresh blocks of tofu that have just been made and they will cut a chunk off for you, fish that are so fresh, they are still twitching!  I purposely did not take any pictures of the fresh meat booths, but let's just say, the chicken or pork you buy there has not been processed by a plant nor has it been sitting in a meat locker for weeks (and that of course, brings up the issue of food regulations, but there just isn't enough room in this blog...).

So yes, the adventure continues and there is plenty to learn.  I could go on and on, but these were some of the more interesting points worth mentioning.  We are finally getting somewhat settled in our house and the boys are about to start school, so things should start calming down soon...I think.