These tasty crispy enoki mushrooms are going to become one of your favorite ways to enjoy mushrooms! Lightly breaded and fried up simply and easily in a pan, they make a great garnish, appetizer, side dish, or meal! They're not only fun to eat, they're also fun to look at!

One of my favorite mushrooms to eat is enoki mushrooms.

Like almost all mushrooms, they're loaded with savory umami flavor, but I also love their texture...how there's a bit of squeak to them when you chew them. And they are also substantial to eat despite their light and stringy appearance that would seem to indicate otherwise.

One common to enjoy them is to put them in a soup, and I will often add a bunch to a bowl of noodle soup.

But did you know that you can also fry these babies up into the coolest looking "trees" that taste totally delicious while also being fun to eat?

Enoki mushrooms are often sold in a bundle sealed in a plastic package, often times about 200g, but this can vary. The mushrooms are connected at the bottom with a dirt clump still intact from where they were harvested.

The first step is to cut off this bottom section and discard it, removing about 1 - 1 ½ inches. You want to cut off just enough to get rid of the bulk of the dirt part.

DO NOT WASH THE MUSHROOMS UNDER WATER. If you see any bits of dirt in the mushrooms, use a damp paper towel, fine brush, or your finger tips to remove them. The mushrooms will soak up the water if they get wet and will not crisp up when fried...and crispy enoki mushrooms are what we are after!

How To Get the Crispy Coating

To help make the enoki mushrooms crisp, we need to give them a thorough dusting in a dry floury mixture. The coating is a mixture of tapioca starch, onion powder, garlic powder, salt, white pepper, and paprika. I use tapioca starch not only because it's gluten-free, but because of its very fine texture, it sticks well to every surface of the mushrooms.

Dredge the mushroom bundles in the starch mixture, making sure to get into all the nooks and crannies, gently shake off the excess, and put the mushrooms aside until you are ready to cook.

I add a couple tablespoons to a hot skillet that has been heating over medium-high heat. As always, I use extra light olive oil because of it's neutral flavor and high smoke point, but other neutral flavored oils, like canola, will also work.

Add a few enoki bundles to the pan, being careful not to overcrowd them. Slide the mushrooms around in the oil to make sure the underside gets coated and let them fry for 1-2 minutes, until the bottoms are golden.

Flip the mushrooms over with chopsticks or tongs, adding a bit more oil to the pan if necessary. Without enough oil in the pan, the mushrooms will simply char and not brown and crisp nicely.

Flip the mushrooms again as necessary to achieve a nice golden color on both sides. Once done, transfer them to a wire rack set over paper towels or in a baking dish. Continue with the remaining enoki bundles, remembering to add fresh oil to the pan as necessary.

Can You Bake the Mushrooms?

Baking the enoki mushrooms does not yield the nice crisp texture you get from frying them directly in some oil on a hot skillet. You also run the risk of the mushrooms releasing liquid as they bake which will only result in soggy mushrooms...exactly what you do not want.

How To Serve The Mushrooms

Sprinkle the crispy enoki mushrooms with some coarse salt and garnish with chopped green onions and sesame seeds and they are ready to devour!

They are delightfully crisp on the outside without having a heavy batter on them. They have their signature squeakiness with every bite, and besides being innately loaded with umami, they have an extra boost of flavor from the seasonings.

If you enjoy eating mushrooms like I do, you might also want to check out my recipe for Pan-Fried King Oyster Mushrooms, a delicious and hearty dish. Or for a cool and refreshing take on mushrooms, my Cold Asian Greens and Mushrooms with Sesame Vinaigrette is a great option.

And while Buddha's Delight (Jai) is not all about mushrooms, it does contain a few ingredients that are part of the same edible fungus family! They each contribute texture and umami to this traditional vegetarian Chinese dish and if you love mushrooms/fungus, you have to give it a try!

While I, personally, love enjoying these crispy enoki mushrooms as a meal, you can serve them as an appetizer or a side dish to a salad. You can also add one or two crispy bundles as a garnish to an entree or hot bowl of soup.

Any way you choose to serve them, I think you're going to love this different way of cooking enoki mushrooms. Fun and delicious, this recipe might just make you love eating them more than before! 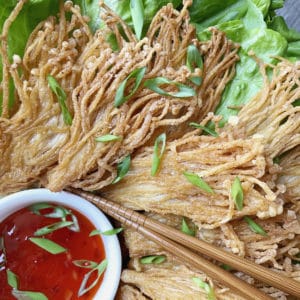 These tasty crispy enoki mushrooms are going to become one of your favorite ways to enjoy mushrooms! Lightly breaded and fried up simply and easily in a pan, they make a great garnish, appetizer, side dish, or meal! They're not only fun to eat, they're also fun to look at!
No ratings yet
Print Pin Rate
Course: Appetizers, Entrees, Side Dish, Vegetables
Cuisine: Asian, Western
Keyword: finger food, gluten-free, low-carb, paleo, vegan, vegan side dishes, vegetarian
Prep Time: 15 minutes
Cook Time: 20 minutes
Makes: 2 servings as a side dish dish
Author: Lisa from A Day in the Kitchen