Rice crust pizza is a delicious alternative to traditional wheat crusts! It has a crisp edge, slight chew, and is strong enough to hold together when you pick up a slice! It's a tasty gluten-free base for your favorite pizza toppings, whether you go the traditional route or try something with an Asian twist.

How To Make the Pizza Crust

Start with cooled cooked brown rice. If you cook the brown rice fresh, allow it to dry out and cool to room temperature before you start making the crust so that there isn't too much moisture.

The rice needs some glue to hold it together, so for that you'll need an egg, and mozzarella cheese. I also add Parmesan and some spices for extra flavor.

Mix all the ingredients well and transfer the rice mixture to a parchment lined baking sheet or pizza pan. Flatten and shape the crust, making sure to press and compact the rice together so it will hold together after being baked.

Pop the pizza back in the oven for 10 minutes and it's ready to eat!

Can I use white rice instead of brown? Yes, but it might not have the same chew that you get from the hulls of the brown rice. Just make sure that the white rice is at least room temperature before you start mixing it with the other ingredients to make the crust

Can I make the crust ahead of time? Yes. Get to the part of baking the crust, let it cool completely, and then it can be put in the fridge until you're ready to make the pizza to bake and serve.

Can I eat leftover slices cold from the refrigerator? The pizza is best eaten right away after baking, but if you do have leftover, it would probably taste better to reheat it in the oven for a few minutes to soften the rice crust.

A Japanese restaurant here in Hong Kong was the inspiration behind my rice crust pizza. Toi Hokkaido no longer exists in Hong Kong, but nowhere on the menu would you find pepperoni or a meat lovers pizza.

If you want to expand on the rice crust idea, some great Asian topping ideas could be:

Rice crust pizza is automatically gluten-free, but if you are looking for a more traditional type of crust that is still gluten-free, check out these options:

Easy Amazing Gluten-Free Pizza Crust is just as it says. It is easy and amazing and one of my most popular recipes.

Crisp Crust Gluten-Free Pan Pizza is another delicious option where the crust is more like a traditional wheat crust.

Is this your typical type of pizza crust? Absolutely not. But is it a worthy contender? Totally! You'll be so pleasantly surprised to see that rice crust pizza is easy to make and delicious...you'll want to make it again and again! 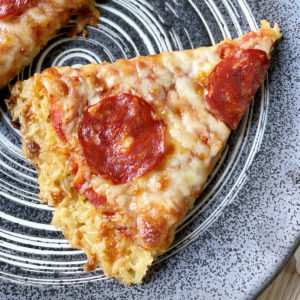 Rice crust pizza is a delicious alternative to traditional wheat crusts! It has a crisp edge, slight chew, and is strong enough to hold together when you pick up a slice! It's a tasty gluten-free base for your favorite pizza toppings, whether you go the traditional route or try something with an Asian twist.
4.82 from 11 votes
Print Pin Rate
Course: Main Course
Cuisine: Western
Keyword: gluten-free pizza
Prep Time: 15 minutes
Cook Time: 30 minutes
Total Time: 45 minutes
Makes: 4 servings
Author: Lisa from A Day in the Kitchen

This post was originally published on April 20, 2017 and republished in April 2022 with an updated recipe, new photos, instructional photos, and writing.