Home » Recipes » How To » How To Cut A Pineapple

Learn how to cut a pineapple easily and without losing too much of that golden juicy delicious fruit! There's no need to waste money buying pre-cut pineapple when you can do it yourself!

There's nothing quite like enjoying a deliciously sweet golden pineapple on a warm day.

Just the mere sight of a pineapple can inspire thoughts of tropical beaches and tall palm trees.

We can't always get to tropical destinations at a moment's notice, but we can certainly enjoy a taste of the tropics by digging into some fresh-cut pineapple.

Not sure how to peel and cut a pineapple, though? I've got you covered!

Let's start with the basics. How do you choose a pineapple?

When I buy a pineapple, I'd like it to be ripe or as close to ripe as I can get. What I look for:

Depending on the variety, color can vary with some skins being all golden like the one in the photo above, or some varieties of pineapple may be golden with green mixed in and still be ripe. In those cases, I rely on the other criteria (size of knobs, yield, and smell) to help me figure out if it's a ripe pineapple or not.

That being said, if I can't get a pineapple that is already ripe, I will buy one that still has the large knobs and is close to being ripe and let it sit on the counter until it's ready.

How To Cut A Pineapple

Removing the leaves on top of the pineapple, otherwise known as the crown (and rightly named considering how it looks!), is a good place to start when cutting a fresh pineapple.

You can simply cut the crown off by slicing through the top of the pineapple as many people do.

I, however, like how they showed how to do it at the Dole Plantation in Hawaii when my husband and I visited there many years ago.

Carefully grab the crown with one hand (be careful of sharp edges or tiny spikes on the leaves), and then firmly grab the body of the pineapple with your other hand.

Twisting your hands in opposite directions, the crown should release and twist out of the pineapple. Voila!

Ever since I saw this demonstrated at the Dole Plantation, I have never removed pineapple crowns any other way. For one thing, you don't lose valuable pineapple fruit like you would in cutting the top off.

It's also very fun to do, the crown looks cool enough to use as a decoration on the plate, AND if you are lucky enough to live in the right sort of climate, you can actually try growing your own pineapple from that crown you just twisted off!

As for the bottom of the pineapple, cutting it off is the way to go. Doing so will also provide a flat sturdy base for you to stand your pineapple as you move on to the next step of removing the skin.

With your pineapple set on its flat bottom on a cutting board, cut away the skin with a sharp knife, following the shape of the pineapple as you go from top to bottom.

I try to cut the skin as close to the edge as possible so as not to cut away too much of the fruit. Removing the skin close the edge will expose all these brown holes or "eyes" which are not only unsightly, you also can't eat them.

This may explain why some people choose to cut off the skin by cutting further into the fruit itself, to remove the eyes in one cut of removing the skin. However, you lose a lot of valuable fruit but cutting too far in, not to mention that the fruit closest to the skin is the sweetest. So you definitely don't want to waste that!

After all the skin is removed, you'll see all the brown hole eyes. If you look carefully, you'll notice that the eyes are actually arranged in a diagonal spiral pattern around the pineapple.

Using a sharp knife, make a shallow angled cut on each side of the eyes, like you're making a v-cut, and remove that section. Continue to do this for all the eyes, following their spiraling path around the pineapple.

I have only ever seen this method of cutting out pineapple eyes in Asia, thus why this is often referred to as the "Asian way" to cut a pineapple. I always thought the diagonal carvings in the pineapple looked so cool, but little did I know that this method is all about not wasting the delicious fruit!

Once you're done, you will have a very cool looking pineapple! You're almost there!

Cut the pineapple in half from top to bottom, and cut each of those halves into half again so you have four quarters, each exposing a section of core in each chunk. You're going to want to cut this core away because it's quite tough.

Standing a quarter up on its flat base, carefully cut downwards to remove the core. Repeat for each chunk.

This may sound odd, but this is another tip that I learned from my visit to the Dole Plantation years ago.

After they cut the pineapple open, they put each chunk in a bowl of water for a few minutes. Pineapple contains bromelain, an enzyme that breaks down the protective coating in your mouth, and when you combine that with the acid from the pineapple, you can get a stinging/burning sensation on your tongue and the roof of your mouth.

By place the pineapple in the water, it supposedly helps to rinse away some of that bromelain and acid, thus reducing the burning discomfort from eating the pineapple.

I have read about soaking the pineapple in salt water for 30 minutes to get rid of the bromelain, but I have never tried that. I have found that simply rinsing the pineapple in plain water is enough to make a difference in eliminating any noticeable burning sensation in my mouth when I eat it.

Cutting the Pineapple Into Chunks

We're at the final stretch!

Depending on how you like your pineapple pieces, you can cut each quarter lengthwise in half again and then slice them, so you have smaller fan-like pieces.

Or you can simply cut the pineapple quarters into slices and have broad fan-like pieces...there's no one way to cut them. The important thing is to enjoy it!

Obviously, eating fresh pineapple is the best way to enjoy it. But you can also throw them into a blender with other fruit to make a smoothie, or make a Hawaiian pizza if that's your thing!

If you're interested in checking out other How To's I have for fruit, read about How To Open and Seed A Pomegranate or How To Peel and Cut A Mango, both of which are really useful posts!

And that's it! Don't waste money on pre-cut packs of pineapple, and don't be intimidated by fresh pineapples the next time you're at the market! Now you know how to cut a pineapple yourself and can enjoy a taste of the tropics any time you want! 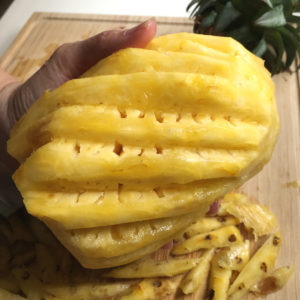 How To Cut A Pineapple