Comforting and hearty, rice porridge congee is a traditional Chinese homey meal that is perfect for easing symptoms when you're under the weather. It also hits the spot for warming you up on chilly days. 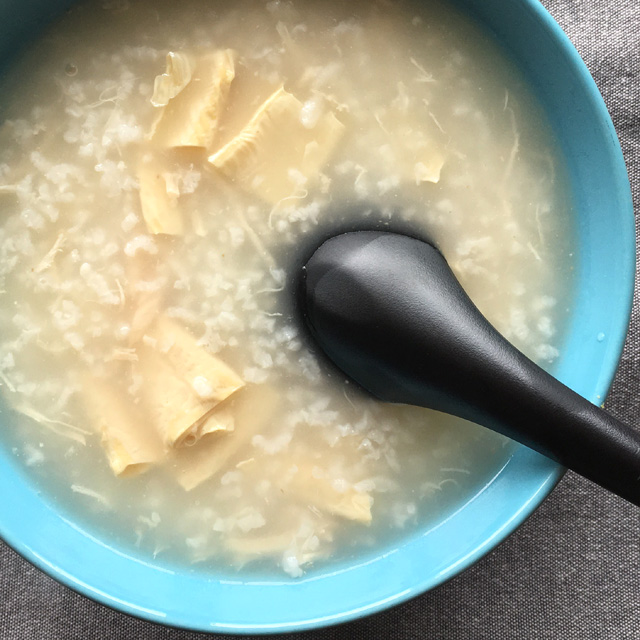 Chinese rice porridge congee, or “jook” in Cantonese, is very much a “home” sort of meal, made by Chinese mothers and grandmothers for their families. That’s how I came to know it…my mom would make it for us whenever we were sick with a cold or the flu and it was the perfect remedy to make us feel more comfortable. But it wasn’t only limited to when we were sick! No matter when my mom made it, it was always a welcome meal, especially on chilly days.

Needless to say, the idea of rice porridge to ease cold or flu symptoms was so ingrained in me that I started making it on my own after I got married whenever my husband or I got sick. I continued making it after I had kids and it is still one of their favorite things to eat. It gives me great satisfaction, being able to share these childhood food memories with them and to teach them how their Chinese grandmother fed her family.

As you can probably guess, rice porridge congee all starts with…rice! 😉 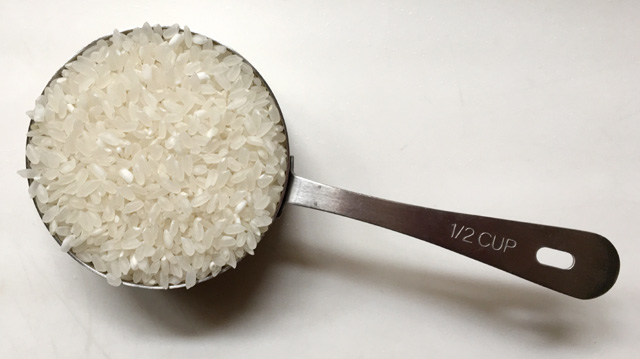 It is basically rice that is cooked in a lot of liquid (in this case, chicken stock) so that you end up with a thickened rice soup. The ratio in my recipe is ½ cup of uncooked rice to 7 cups of liquid.

In its most basic form, rice is simply cooked in water, but it is incredibly plain. This is a common way to cook it, though, and flavor is achieved through tasty toppings such as pickled vegetables, soy sauce, green onions, sliced fresh ginger, etc.

I, however, like to cook the rice in a really good flavorful chicken stock, and I have included the instructions on how to make it in the recipe below. If you do not want to make your own stock, however, or you don’t have the ingredients on-hand or the time, you can also use your favorite good quality chicken broth/stock to make this. 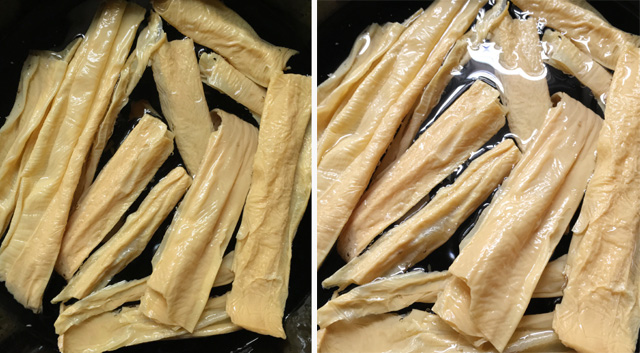 Also, like my mom, I like to put in dried bean curd, or “foo jook”. I know…the name doesn’t exactly sound the most appealing.

And if you see it in the store, you probably wouldn’t think it looks particularly appetizing. However, once you learn how to use it, it’s actually really good and does offer great texture to the congee. It is sold dried, in stick-like form, and they need to be re-hydrated by soaking in water for a couple hours before cooking. This ingredient is optional, of course, but this is how I grew up eating congee, and it doesn’t seem quite right without it. It is simply an ingredient that ties it to “how Mom made it”! 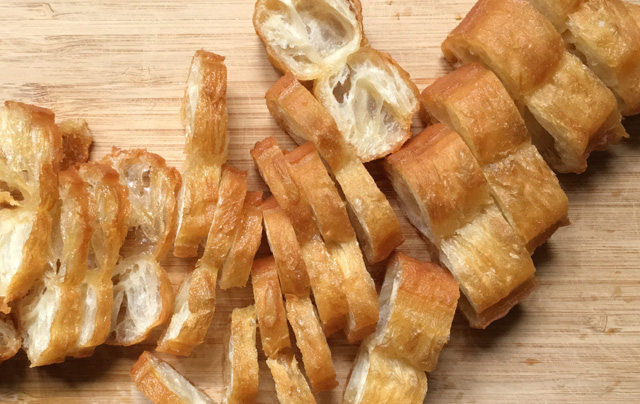 I mentioned toppings earlier, and one that my mom always served alongside her rice porridge was Chinese doughnuts, or “yu ja guai” in Cantonese. It literally means “oil fried devil”. I have no clue whatsoever where they came up with the word "devil" to describe this food, but I do know that they taste good and are awesome in rice porridge congee!

If you’re lucky enough to have a Chinatown where you live, you can buy them freshly made there. (I have memories of my mom sending me down to Chinatown to buy them!) I have also seen them sold already cooked and frozen in Asian supermarkets and all you have to do is heat them up in the oven.

(By the way, my husband will go into a long bit about how these can’t be called “doughnuts” because, by definition, they are NOT doughnuts in any way, shape, or form. I just ignore him…)

This, to me, is homey comfort. And much like chicken soup, this really does make us feel a bit better when we’re under the weather.

You could probably liken his to oatmeal, except it’s not as thick, and it’s savory as opposed to sweet. Here in Hong Kong (and probably in China and some very traditional Chinese households), rice porridge congee is also eaten for breakfast…much like oatmeal! If you are traveling in Asia, many hotels will have a pot of rice porridge at the breakfast buffet, right near the bread! 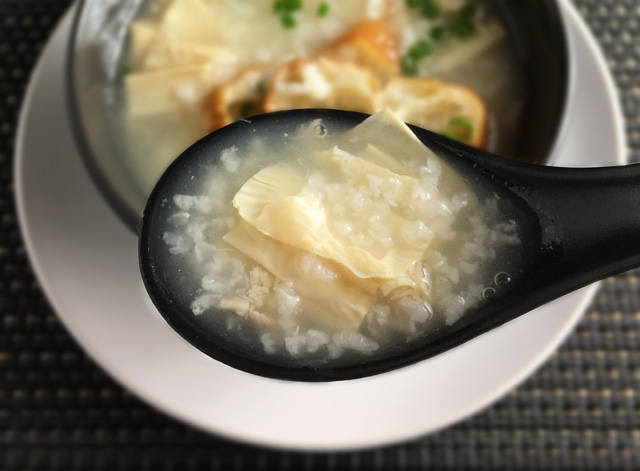 If you grew up in a Chinese household, this is probably bringing back lots of memories from your own childhood and you can relate to everything I've written about it! If you didn't grow up with rice porridge congee, but you've tried it and like it, now you can try making it yourself! Consider making this traditional Chinese homey remedy the next time you’ve got someone under the weather in your house, or if it’s cold outside…or just because! 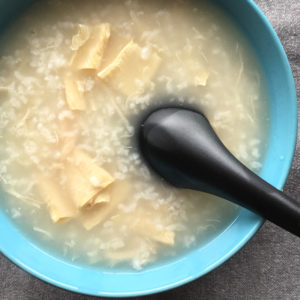 Chicken Stock (if making your own): 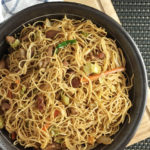 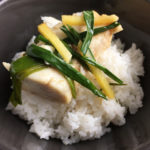 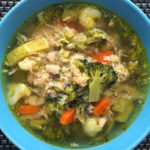 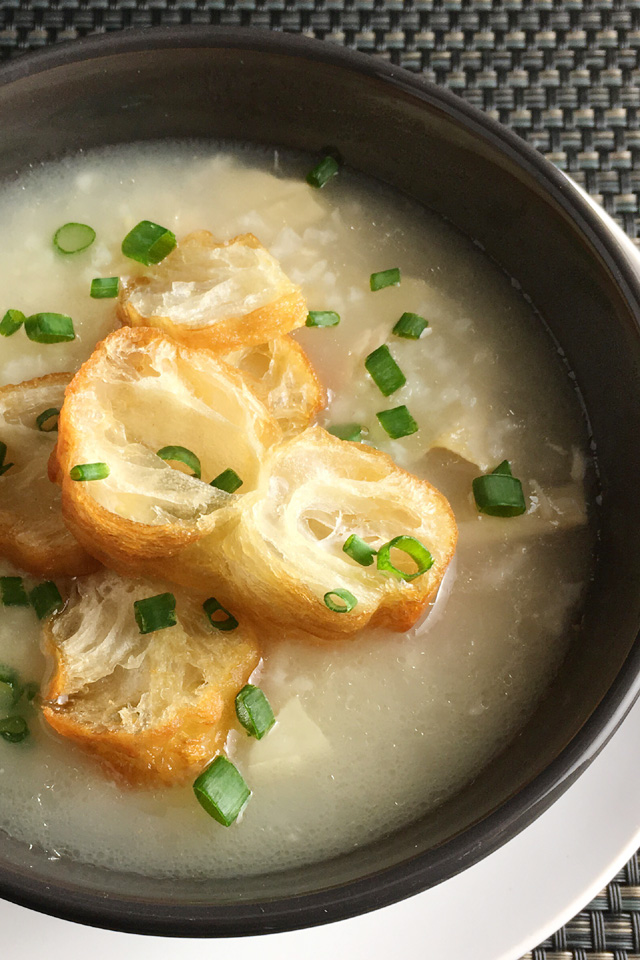