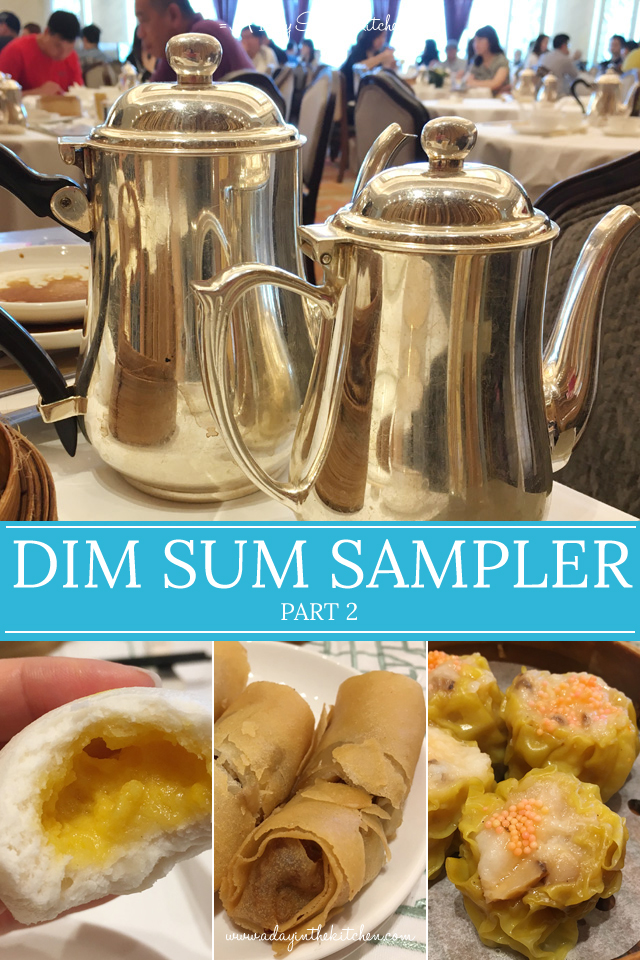 As I had mentioned in Part 1, my friend, Jackie, after having lived in Hong Kong for 5 years, still didn't know what her favorite dim sum dishes were called. She could identify some by sight, but even describing them to me was a challenge. She suggested the Dim Sum Sampler idea, and I was all over the idea! Of course, this project required "research", so off I went on a couple of yum cha field trips with willing friends!

Also, as mentioned in Part 1, I talked about dim sum being served on trolleys. This is not as common as it used to be, so if you can find a restaurant that still serves dim sum this way, go check it out. 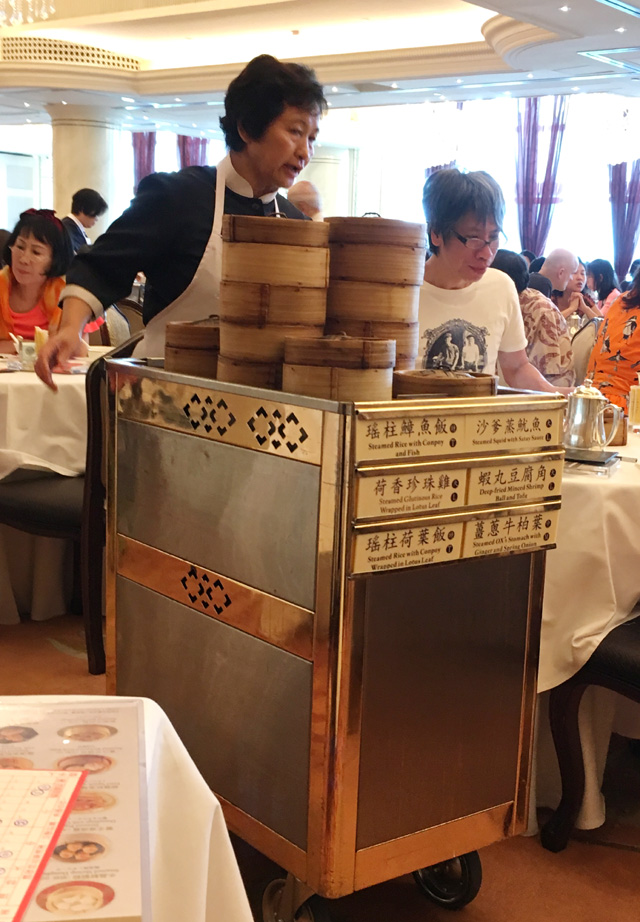 This is what steamer carts often look like now, with signs on the front indicating what is available. However, back when I was a kid, the ladies pushing the carts would literally repeat over and over and over again what they had. So you had to listen for what you wanted. 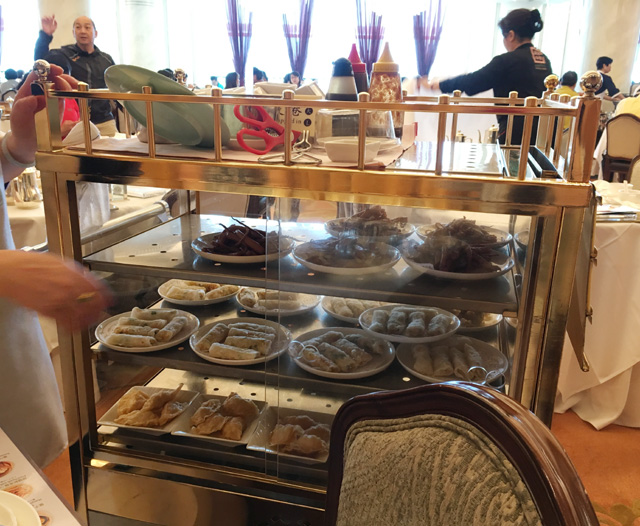 Then there are the trolleys where you can see what's available. These carts also have signs on the front of them, but it's also easier to just look and see what's there. In either case, whether it be the steamer baskets or the display type trolleys, you can always look and point. But with my Dim Sum Sampler guides, you can learn to look, point, AND say the names of the items you want!

On to the food! 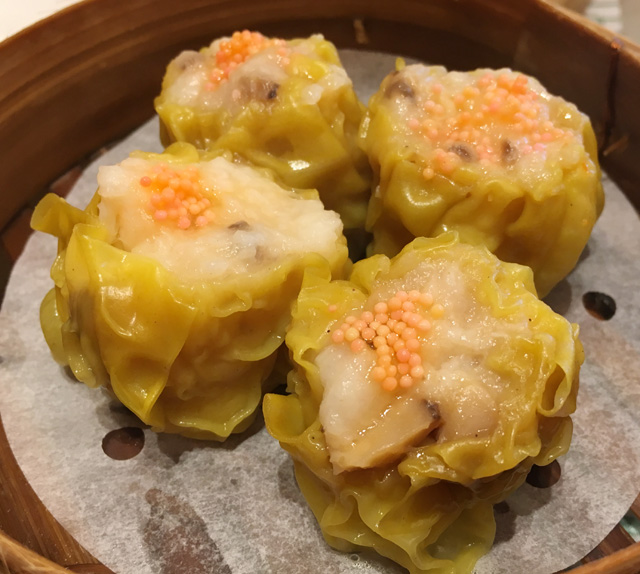 This is a dim sum staple. Siu mai (see-ew my) are steamed pork dumplings (sometimes with shrimp and mushrooms) in a wonton wrapper. They almost go hand-in-hand with Haa-Gow (described in Dim Sum Sampler - Part 1). You will often hear the ladies say "Haa-Gow Siu Mai" as if it's one sentence, and they are often in the same steamer trolley. People often order the two together as well. 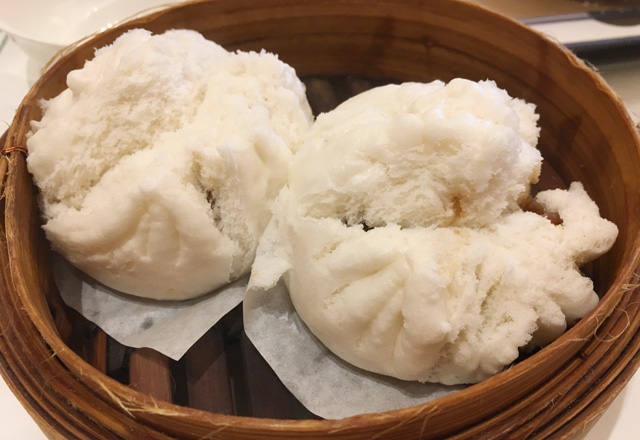 This was one of the items my friend, Jackie, had a doozy of a time trying to describe to me. I couldn't figure out what she was talking about for the longest time! These are steamed buns filled with cha-siu (barbecue pork) filling. Steamed buns sound odd, I know, but they are really yummy. The bread is soft and moist, and while they don't have much flavor on their own, the filling compensates for all of that. 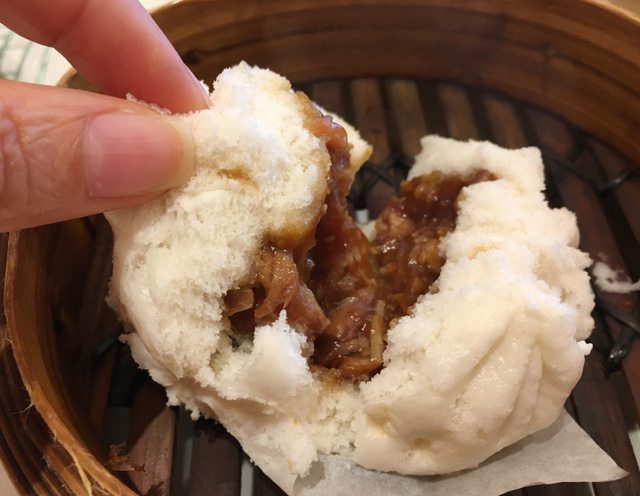 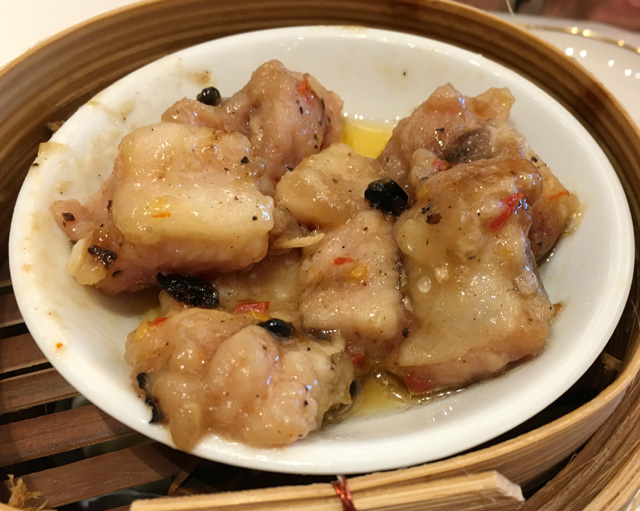 I wish this photo were a little more aesthetically pleasing, but you can't judge a book by its cover, right? Pai Gwut (pi-gwut) is steamed pork spareribs. They have been marinated in a fermented black bean, garlic, and chili sauce. They are incredibly tasty, and the meat on the spareribs is tender.

Sometimes you will see Pai Gwut Faan, which is steamed pork spareribs over rice. This is a staple dish whenever I go for dim sum with my family. The juices and seasonings from the Pai Gwut sauce seeps down into the rice and it's a meal all in one. 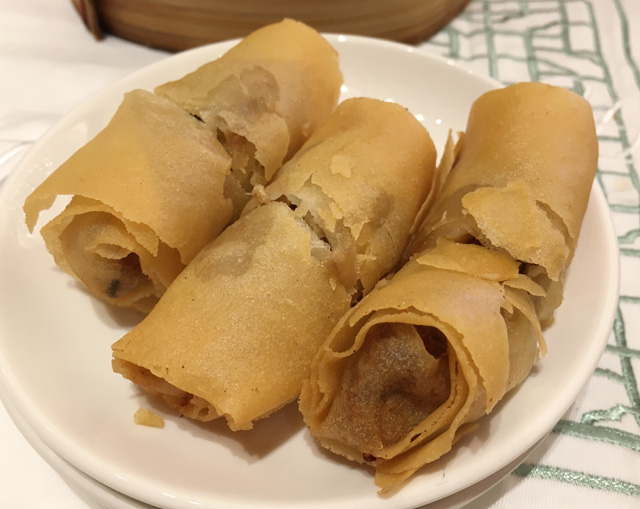 Chuun Guun are deep-fried spring rolls (or egg rolls). I can't think of anyone who doesn't like these. 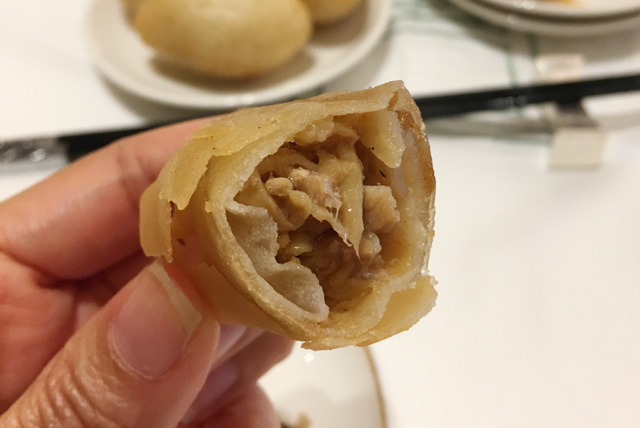 Crispy crunch on the outside, with a tasty pork and bamboo shoots filling on the inside. Sometimes there are other fillings, but this is one of the most common and traditional ones. It is often served with a side of Worcestershire sauce, called "geep-jup" in Cantonese. I used to think my mother was asking for "ketchup" with the egg rolls and it made no sense to me, especially when the sauce that was served was thin and brown and not thick and red! 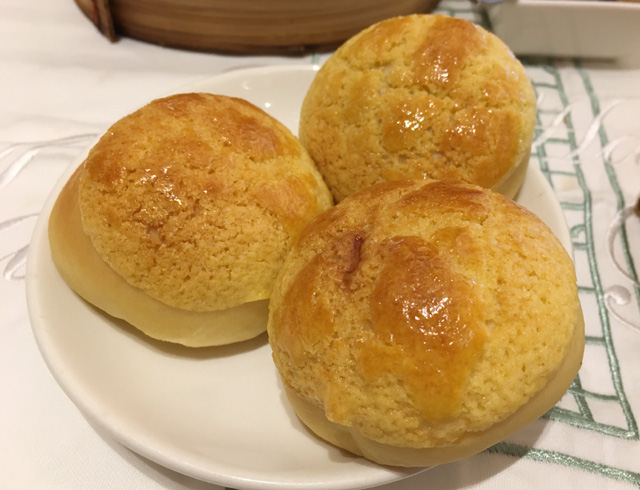 This is a variation on the Cha Siu Bao I just talked about. The Bo Loh Cha Siu Bao is baked, not steamed, and each bao, or bun, is topped with a sweet mixture that, when bakes up, is a bit crumbly. It is this baked topping that the "Bo Loh" refers to as it resembles the skin of a pineapple. 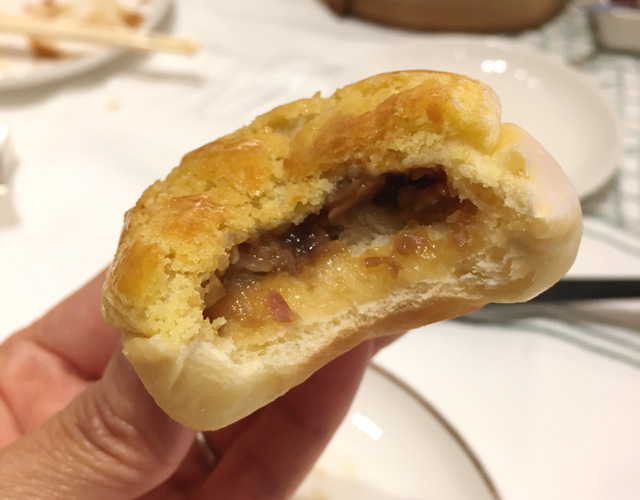 At Chinese bakeries, you can buy a simple Bo Loh Bao, which is a plain baked bun with this "pineapple" topping. It has no filling, but it is yummy in its own right and it is one of my favorite Chinese bakery items. 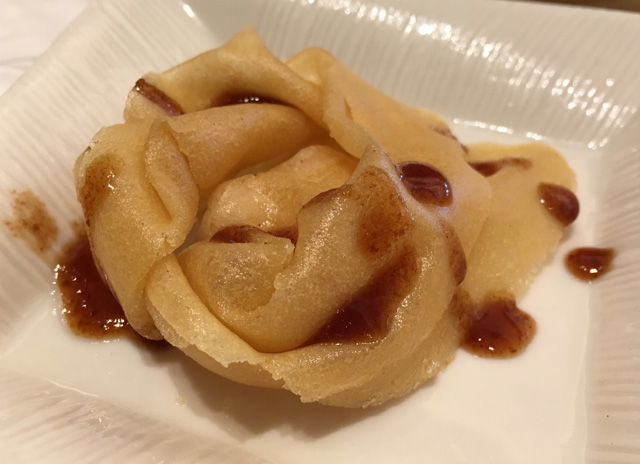 Jiao Wun Tun (jeow wun tun) is deep fried won ton dumplings. In case you are not already familiar, won ton is traditionally served in soup. A savory pork and shrimp filling is wrapped in a wonton wrapper and boiled and served in soup, often with noodles. This deep fried version skips the soup and goes the crispy route! Crispy crunchy on the outside with a ball of filling on the inside,  it is often served with a sweet and sour sauce. 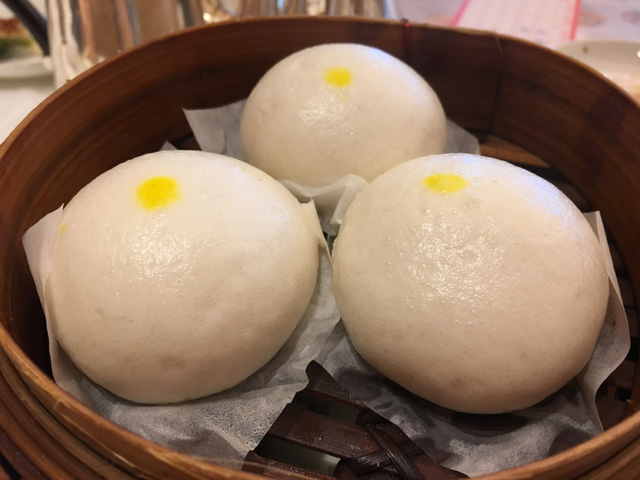 Nai Wong Bao literally translates into "milk yellow bun". This steamed bun is similar to the steamed Cha Siu Bao mentioned above, but these are fully enclosed and are sweet instead of savory. The filling, as the name states, is yellow, and is made of from milk, egg yolks and sugar. 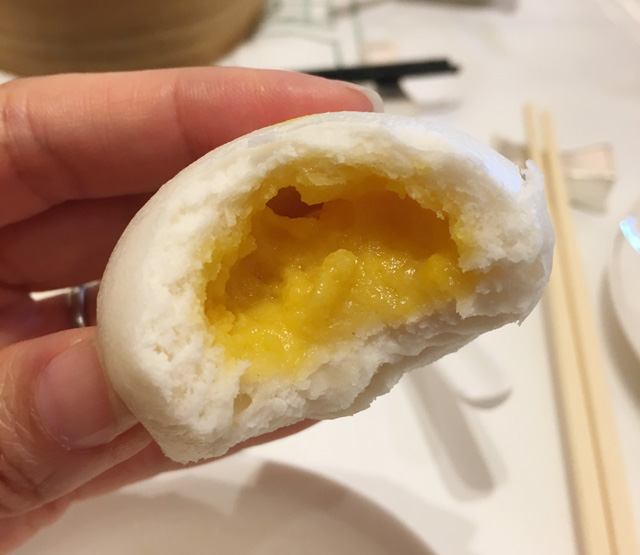 Again, the dough of the bun is nice and soft and the flavor doesn't compete with the tasty filling inside. It is a yummy way to end your dim sum meal.

Along with Dim Sum Sampler - Part 1, you should be able to get a good variety of dim sum dishes the next time you go "yum cha". Try ordering any of the dishes by calling them by name and let me know how it goes! Happy Dim Summing! 😉

"Good food is a celebration of life."
~ Sophia Loren.