Crispy chow mein noodles topped with meat and vegetables in a delicious gravy is a Chinese dish you're going to love! And instead of pan-frying the noodles, they're made crisp in the oven!

You should know by now that I love noodles. LOVE them.

And one of my favorite ways to enjoy them is in this crispy chow mein recipe, inspired by how my dad used to make it for us!

It is a delicious combination of noodles that have crispness and chew at the same time, topped with a beefy vegetable saucy topping that is full of flavor, and I'm so excited to finally share this on the blog!

How to Make the Noodles Crispy

Traditionally, and as my dad had always done it, the noodles are pan-fried in oil to make them crispy. Even though pan-frying them makes them so good, I was never a fan of cooking with that much oil.

It also made cooking chow mein for more than one person a challenge because the noodles would have to be cooked in batches which would take forever (an exaggeration, but you get the point).

So I came up with the idea of baking the noodles. I could bake a large quantity at once on a sheet pan and still achieve a level of crispiness on the noodles without using a whole lot of oil. Perfect!

Start with fresh dry chow mein noodles that are usually found in the refrigerator section at your Asian market. Here in Hong Kong, I buy them in loose bundles (as shown below) at a noodle stall at the wet market. If you can't find fresh/refrigerated noodles, you can also use the packaged dried egg noodles (found in the pantry aisle with all the other dried noodles).

Boil the noodles just until the noodles are separated and then drain them and rinse them in cool water to stop the cooking process.

Drain the noodles well, shaking as much water out of the colander as you can, then cut through the noodles a couple of times with kitchen shears so the noodles are easier to handle. Mix them with some oil and salt before transferring them to a greased baking sheet. Let them crisp up in a 450F/230C oven for about 20-30 minutes until they are lightly browned.

The noodles will not be completely crispy throughout, but that's okay! You'll have crispy noodles on top, bottom, and edges.

The Beef and Vegetable Topping

I like to use a tender cut of beef like rib eye or sirloin, sliced thin, and combine it with a quick cooking vegetable like sugar snap peas.

The aromatics for the toppings is simply chopped onions and scallions. The sauce is made up of beef broth (chicken or vegetable broth is okay), oyster sauce, soy sauce/tamari, honey, sesame oil, and white pepper.

Start by sauteeing the onions and the whites of the scallions for about a minute before adding in the beef. Stir-fry until the beef is done about halfway.

Then it's time for the vegetables, the sauce mixture, and then a slurry of tapioca starch and broth or water to help thicken the sauce into a nice gravy.

Transfer your crispy chow mein noodles to a serving plate and top with the meat and vegetable sauce. Make sure to leave a border of noodles uncovered by the gravy so you get to enjoy the crispness!

Where can I find the chow mein noodles?

Can I use something else besides beef?

Use chicken or shrimp, or make it vegetarian. Chinese/shiitake mushrooms would be a great substitution because of their meaty texture and for the umami they would add to the dish.

What if I can't find beef broth?

Chicken broth or vegetable broth can be substituted for the beef broth. You can also use water, but you will need to adjust the sauce seasonings to compensate for the lack of flavor in the water. Be sure to taste the gravy and adjust as necessary before ladling over the noodles.

What if I don't have tapioca starch?

Tapioca starch can be replaced with cornstarch.

Can this dish be gluten-free?

Unfortunately, you can't get the same crispy noodle texture by using gluten-free noodles like rice noodles. You can deep fry rice vermicelli noodles to make them crisp, but they will be puffed and won't have the same chew as regular chow mein noodles and it will just be a completely different eating experience.

If you don't care about the crispy noodle factor, the meat and vegetable gravy can be served over boiled gluten-free noodles and it can become a "wet" chow mein.

What about reheating leftovers?

The crispy chow mein is best eaten when it is made. If you have leftovers, though, the noodles won't reheat crispy again because of the gravy...but that's okay, too! Simply reheat the chow mein in the microwave. Any crispy noodles that aren't covered in sauce will simply be more dry than those that are.

This type of chow mein that is sometimes referred to as Hong Kong style chow mein or simply crispy noodle chow mein. As I mentioned above, it's how my dad would often make it for us when I was younger.

Whenever he'd start gathering the ingredients, I would get SO excited. I'd watch him fry the noodles and cook the beef and veggies. He would make individual servings and we'd each get out own plate...and he wouldn't just pour the sauce on the noodles...he would carefully drizzle it over (with just a regular ol' tablespoon) until he felt there was just the right amount.

And when I finally did get to dig in, I ate every. last. bit.

Now that I make this for my family, they absolutely love it and we can easily polish off the entire dish as a meal with no leftovers!

It also seems chow mein runs in my family since I also have my mom's BBQ Pork Chow Mein recipe that is worth checking out! It's a stir-fried chow mein recipe and not crispy, but still oh-so-good in its own right!

So if you love noodles like I do, and you love a good chow mein, give this crispy chow mein noodle recipe a try. It's another dish from my culture and my childhood that I'm excited to share with you, and I'm sure you're going to love it! 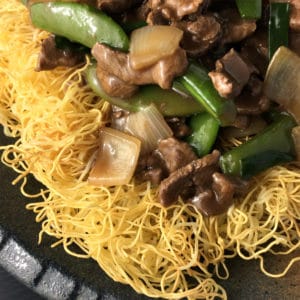 Crispy chow mein noodles topped with meat and vegetables in a delicious gravy is a Chinese dish you're going to love! And instead of pan-frying the noodles, they're made crisp in the oven!
5 from 5 votes
Print Pin Rate
Course: Main Dishes
Cuisine: Chinese
Keyword: Hong Kong noodles, oven-baked crispy noodles
Makes: 6 servings
Author: Lisa from A Day in the Kitchen