These cold spicy cucumber bites are tasty morsels that combine savory, sweet, sour, and spicy flavors all in one bite! Crisp and refreshing, they make a great side dish or appetizer to heavier dishes! 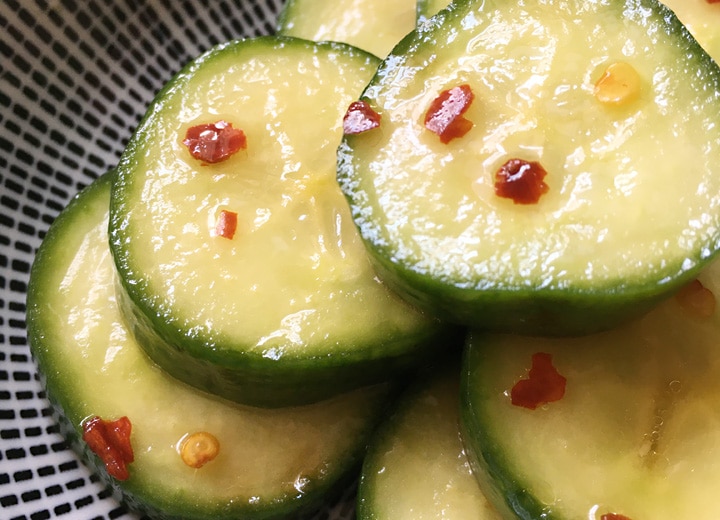 Sometimes we need something to balance slightly heavier dishes or meals...

...something that is cold, refreshing and crisp...

...and that tastes good, of course.

These cold spicy cucumber bites satisfy all the criteria...

...their tastiness coming from a bit of savory, sweet, sour, and spice all at once.

On top of that, they are very simple to make!

How To Make Cucumber Bites

Obviously, you're going to need a cucumber. I prefer using English cucumbers or Persian cucumbers, mainly because their skin are not as thick or tough as regular cucumbers.

Slice the cucumber about ½" thick so you get nice bite-fulls and so that they hold their shape. Next comes a sprinkling of salt over the slices. 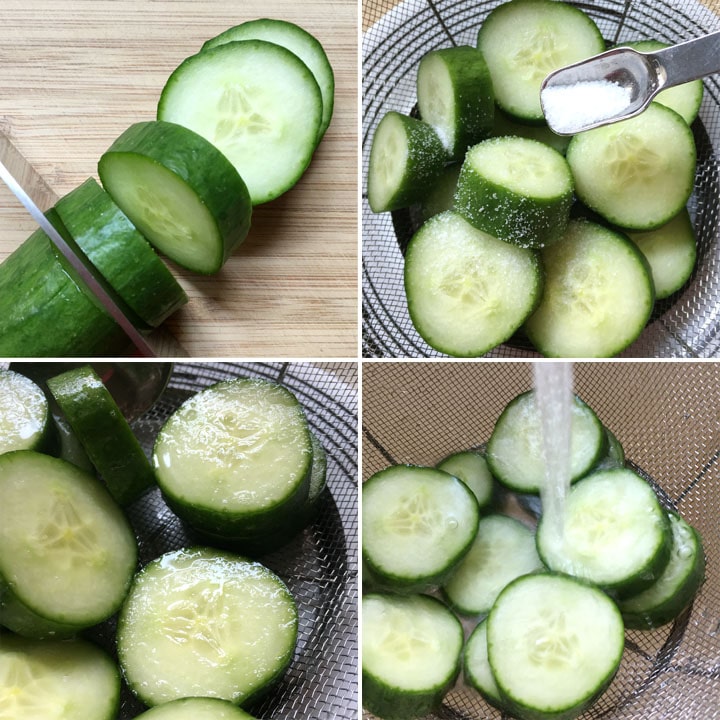 Why the salt? Through some scientific action called osmosis, the salt's job is to draw out some of the water/moisture from the cucumber that would otherwise end up diluting the marinade later. It also helps to crisp up the cucumbers a bit.

As an alternative to thick cucumber slices, you can also smash the cucumber and simply make random chunks. While not as perfect looking as the cucumber discs, it tastes just as good and is another great way to enjoy the dish. I also think that the crushing the cucumber chunks allows more of the marinade to soak into the flesh better. 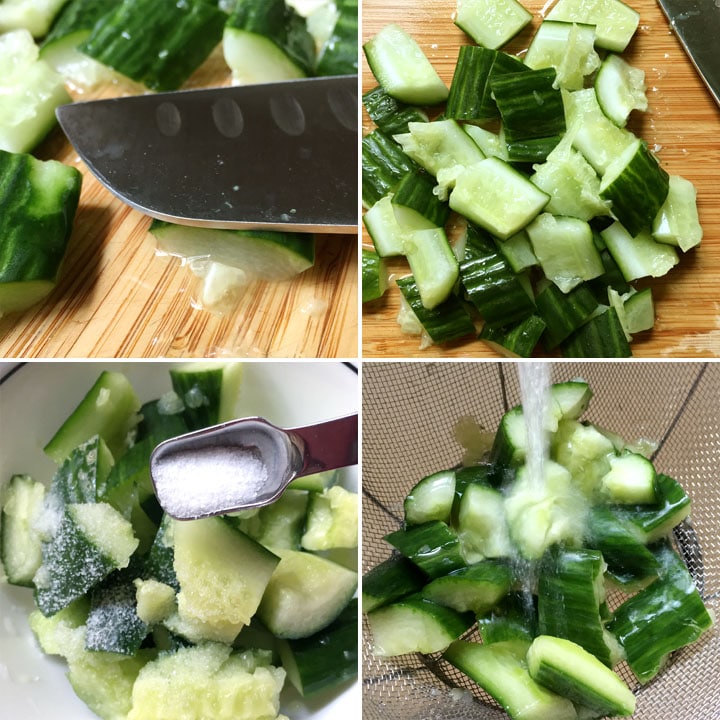 For smashed cucumbers, cut the cucumber down the lengthwise into halves or quarters, then cut each length into rough chunks. Crush them by laying the flat side of a wide knife on to of each chunk and pressing down with the other hand. You can also use the back of a big spoon or a meat tenderizer will also work in a pinch. Do the same salt preparation as you would with the discs.

Pat the cucumbers dry with paper towels, place into a sealable container or dish, and they are now ready for the dressing. The dressing is a simple combination of soy sauce (tamari for gluten-free), unseasoned rice vinegar, honey, mirin, sesame oil, and dried chili flakes. 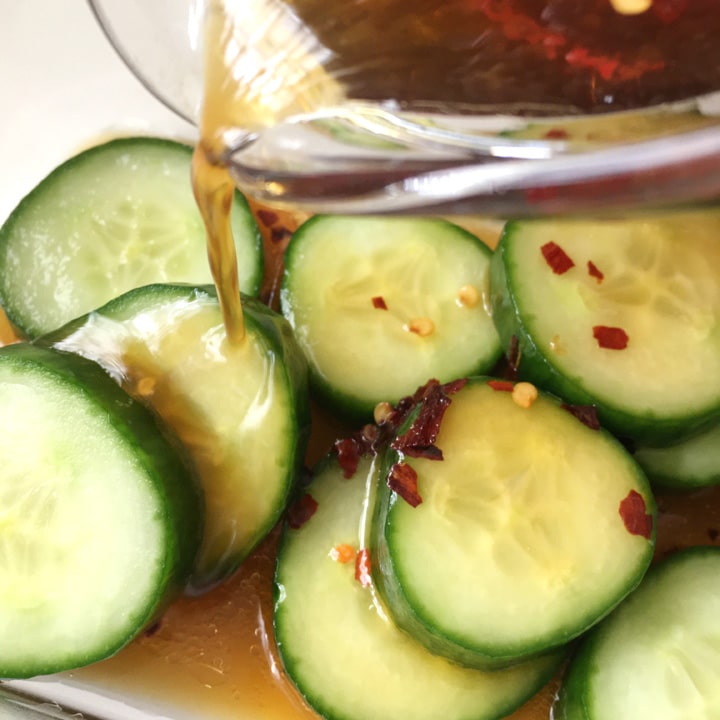 Add the dressing to the cucumber bites and let them marinate in the fridge for at least 4 hours to really let those flavors soak in (remembering to stir them occasionally). If you have the time to let them marinate overnight, they'll be even more flavorful!

Since this recipe was inspired by Din Tai Fung's Cucumber Salad in Vinaigrette Dressing, serve it up alongside some soup dumplings or pan-fried potstickers!

These also go really well with shredded cooked chicken if you want to enjoy the cucumber bites as a meal with a bit more substance.

Simply poach a couple of chicken breasts, shred up the meat and serve it with the marinated cucumber bites. Lay the chicken and cucumbers on a bed of fresh greens, sprinkle some sliced almonds and sesame seeds on top, drizzle some extra dressing on top, and you've got a really nice Asian style salad! 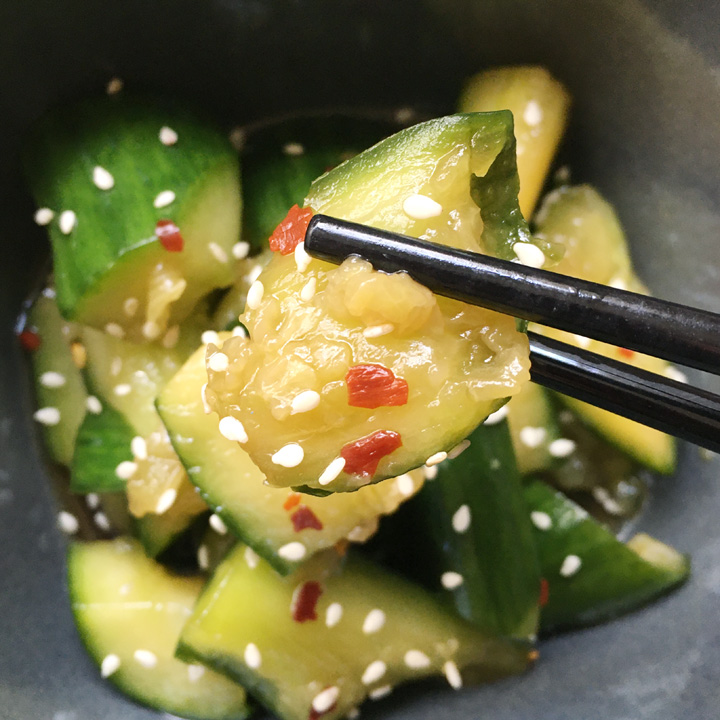 These cool, crisp, refreshing morsels will hit the spot on warm weather days, they'll be a welcome contribution to potluck social gatherings, and they'll be a perfect partner to entrees, dumplings, or greasy finger foods. How ever you decide to serve them up, these cucumber bites are going to be a hit! 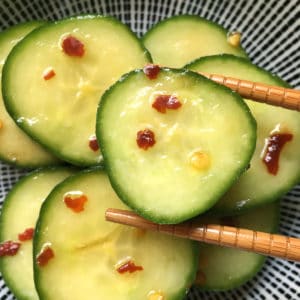 ** This recipe was original published on July 16th, 2017 and republished on March 13th, 2021 with recipe updates, new photos, and writing.