This traditional savory Chinese winter solstice soup is loaded with flavor, incredibly comforting, and totally hits the spot on a cold winter's night! Make it to celebrate the Winter Solstice or any night you're craving a bowl of hot delicious soup! 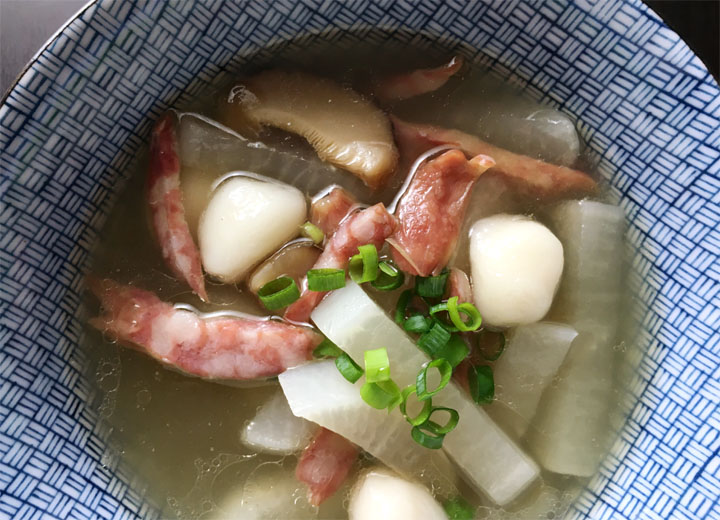 This is not your typical kind of soup. It's not chicken noodle or minestrone or clam chowder.

But if you are Chinese, or have been raised in a somewhat traditional Chinese household, you might know exactly what this is...AND you know that it is amazingly good.

And if you're not Chinese, then you need to know what this umami-rich flavor-packed soup is!

When my mum used to make winter solstice soup, my brother and sisters and I were clueless as to the significance behind it. We didn't know of it by any other name except "yuan", as my mum called it, and all we knew was that it was made once a year in December.

Chinese winter solstice soup...the name which I only just learned a year ago...is a dish my mother made once a year, per tradition, on or about December 21st, whenever the Winter Solstice fell...thus the name! "Tong yuan", as it can be called in Chinese, apparently celebrates the last day of the longest hours of darkness and the onset of the longer daylight hours to come. The soup is a meal itself and is most typically eaten with the whole family as it is also a meal significant of family reunions.

As I have learned, there are different versions of this soup originating from different parts of China and Taiwan and they might be savory or sweet. My mother's version, upon which my recipe is based, is a Cantonese (or southern China) version which is savory. Whether sweet or savory, one thing that is consistent among the different versions is the inclusion of glutinous rice balls..."yuan"...or as I simply call them, dough balls.

Again, depending on which version the soup is, it might only be dough balls and soup, or they might be combined with other meats or vegetables. The dough balls can also be plain, or they might also be filled with different fillings like red bean or peanut paste.

My mum made plain dough balls, made simply from glutinous rice flour and water, and they were eaten in the soup with other flavor-rich ingredients like daikon (Chinese white radish), lop cheng (Chinese preserved sausage), and Chinese mushrooms. It was one delicious experience that we all looked forward to once a year.

Having lived away from my mum for over 20 years, I hadn't had the pleasure of enjoying it for ages...until now!

From memories of what she put in the soup, to casual conversations had over the years about how she makes soup in general and what she would add to give more flavor or make it "sweet", I was able to pull together my version of this winter solstice soup.

As with almost all the soups my mum made, she made the broth for the Chinese winter solstice soup using pork bones. However, I have memories of her saying that using chicken bones would also make a very good broth and that is what I have chosen for my recipe. Chicken bones or broth-worthy chicken pieces are easily found and I have always had an easier time with making good soup from chicken bones than pork bones. 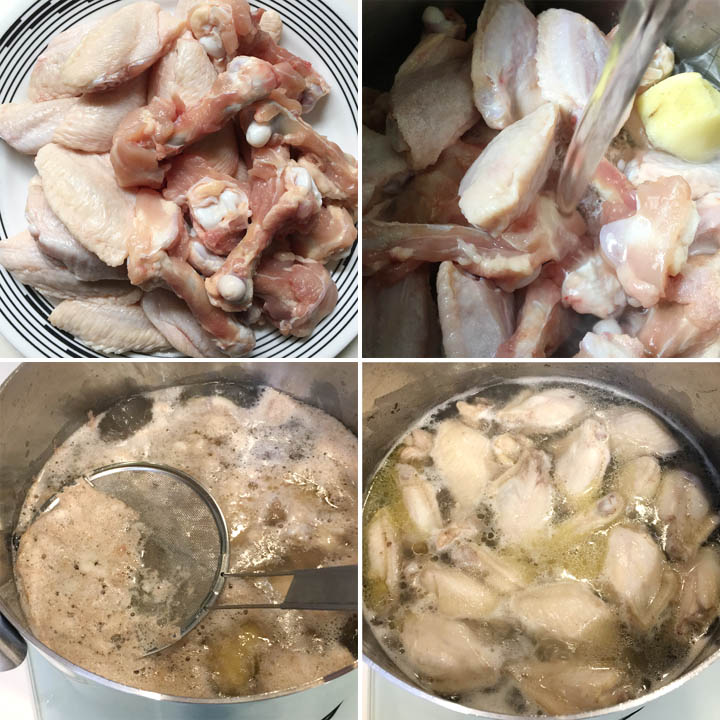 Making the broth works best using chicken bones, a carcass, and pieces like wings and wing tips. Combine the chicken bones with water along with a chunk of ginger and some salt and bring to a boil, skimming off any scum and debris that bubbles up to the surface to get a "clean" broth. Lower the heat and let it simmer for a couple of hours.

While the broth is simmering, that's the time to prepare the rest of the ingredients that are going to really round out this flavorful soup.

The lop cheung, or Chinese preserved sausage, gives a smoky, salty, sweet component to the soup. Cut the sausages in half lengthwise, then make slanted cuts from each half. Depending on how much you like the sausages, you can use 2-4. 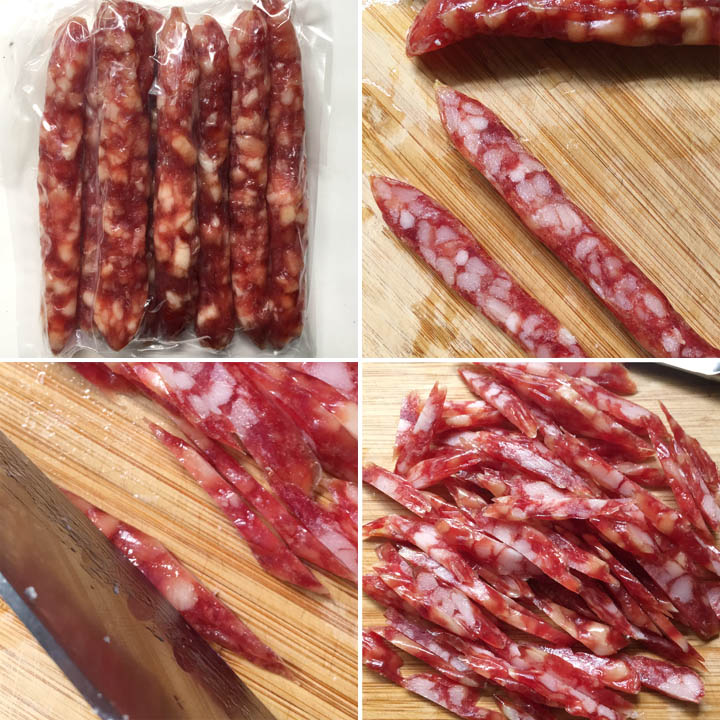 The Chinese mushrooms give the soup umami, or a savory depth to the overall flavor. They are purchased dry and need a good soak for a few hours or overnight before you start to prepare them. Once soaked through, you will be able to slice into them easily. Cut off and remove the hard stems, and then slice the mushrooms caps. 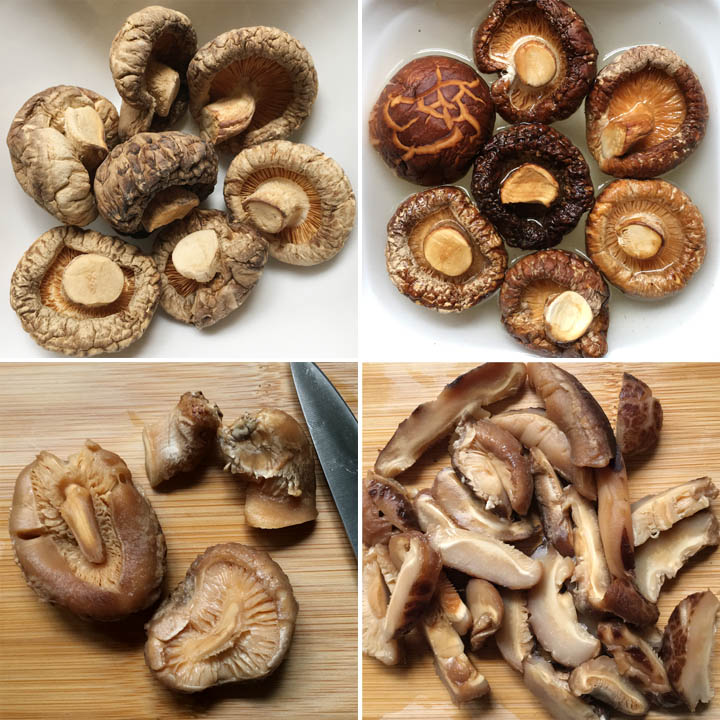 The daikon, or Chinese white radish, resembles a fat giant carrot in shape, is not peppery like other radish varieties, and it provides a natural mild sweetness to the soup. Simply peel the daikon, slice into discs, then slice the discs into sticks. 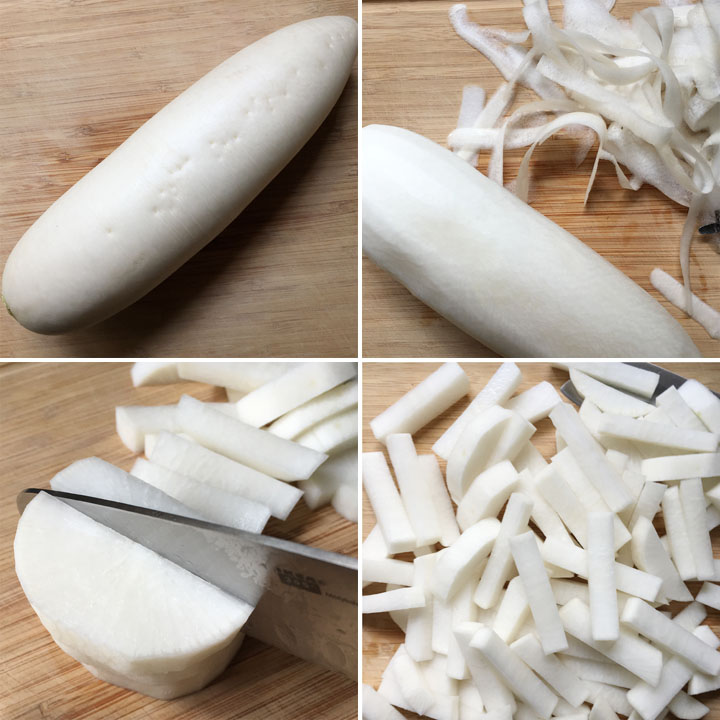 The Yuan (or Dough Balls)

The yuan, the supposed star of this soup is made of glutinous rice flour and water. Also called sweet rice flour, the flour does not contain gluten nor is it sweet. It is merely a flour that has a sticky quality about it when cooked, and these dough balls have a sticky, squidgy, doughy sort of texture when eaten in the soup. Do not use regular rice flour as the dough balls will not float and they will be hard when cooked, not soft and chewy.

Mix the rice flour with water until you get consistency that is similar to Play-Doh...not too sticky and not too dry. About 5 minutes before you are ready to serve the soup, take a chunk and roll it in your hands to form a log shape and break off small chunks about the size of a grape, rolling each chunk roughly into a ball. 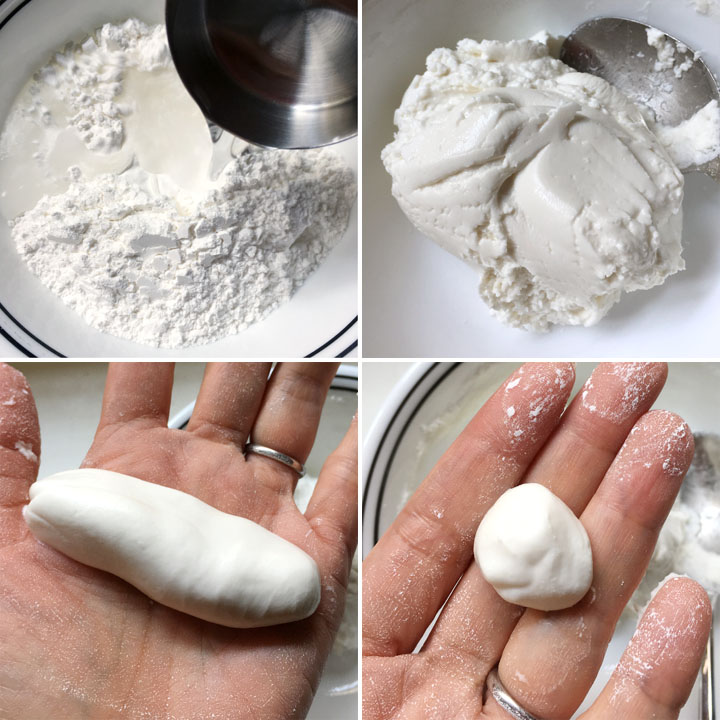 Once the broth has simmered for a couple of hours, remove the bones and any debris using a skimmer, or pour the soup through a sieve into another pot. Add all the sausage, mushrooms, and daikon to the broth and bring it to a boil before letting it simmer for about 30 minutes to cook through. 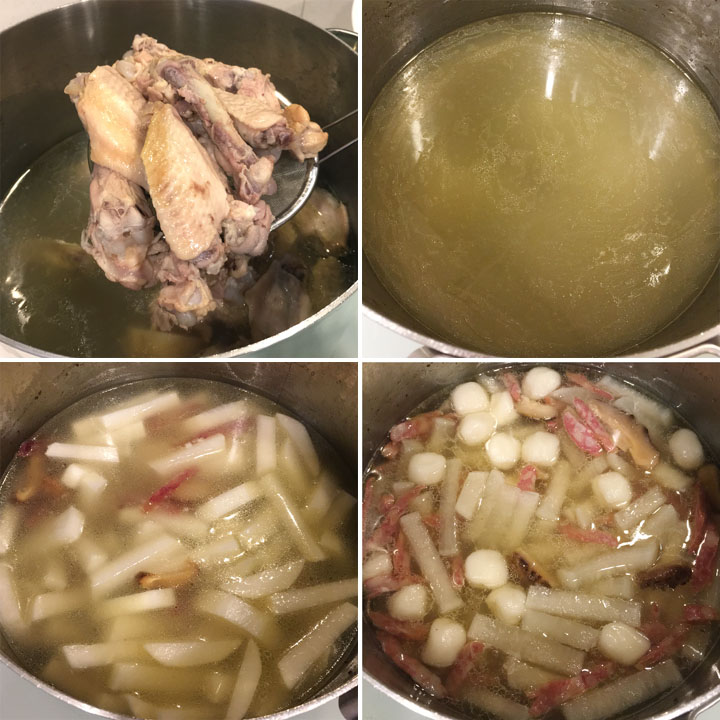 A few minutes before you are ready to serve, that's when the dough balls go in! They are the last thing to be added to the soup as they cook very quickly. You know they are ready when they are all floating at the top and have a very slight translucent look to them.

And that, my friends, is a soup worth celebrating!

My mum would ask us how many yuan we wanted in our bowls of soup and whatever number we said, that's exactly how much she would make. You don't want to make more than what will be eaten as the dough balls become too mushy if left to sit in leftover soup overnight.

Keep in mind that while the dough balls are a key component of this soup, you can certainly skip them if dough balls aren't your thing. They can be very filling and being able to enjoy more of the soup itself without them is totally okay! 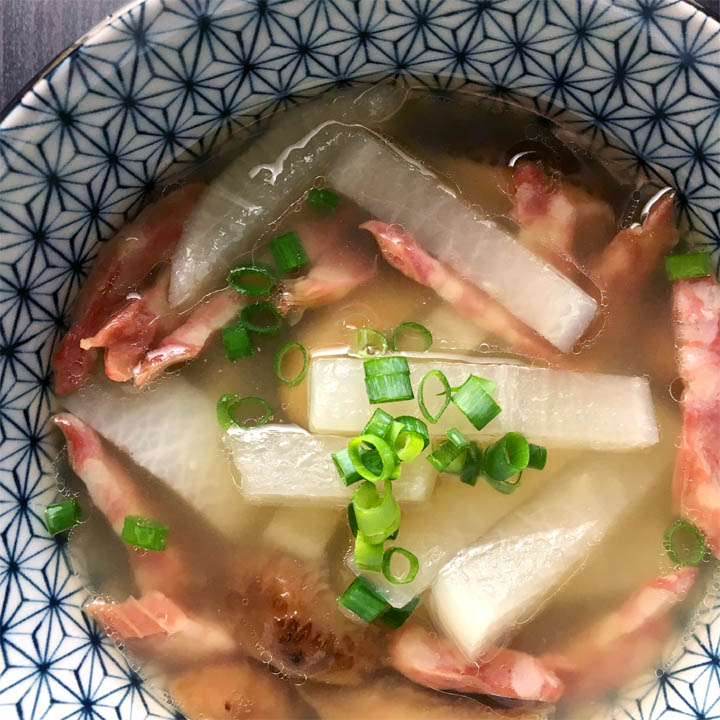 Another thing I remember from when my mum made this soup is that she said it would keep us really warm...and she was right! Perhaps it was the hot dough balls, radiating heat on the inside as they digested that made us feel warm, or perhaps it was that they made us feel so full that we felt comfortable and cozy inside. I'm not exactly sure, but whatever it was, she was right, and we always welcomed it in the middle of the December when it was undoubtedly cold in Canada. 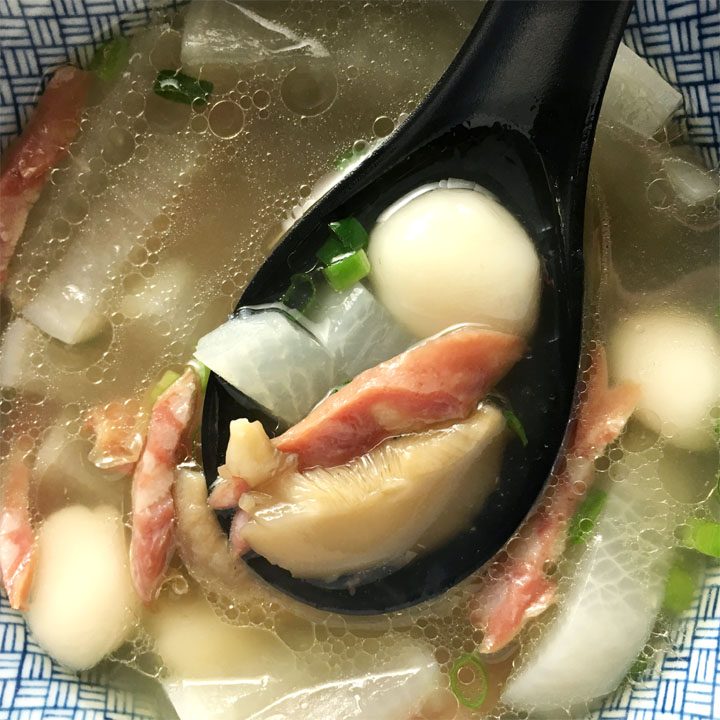 And there you have it, a recipe for another dish from my childhood that stirs up fond and delicious memories and that I'm thrilled to be able to share with you. If you're interested in other Chinese dishes inspired by my mum, be sure to check out Mom's BBQ Pork Chow Mein, Mom's Noodle Egg Foo Young, or Chinese Poached Black Cod!

Traditional savory Chinese winter solstice soup is rich, comforting, and intensely flavorful. It is, quite honestly, so good that I'm more than willing to buck tradition and make it more than once a year and on any day it's really cold! 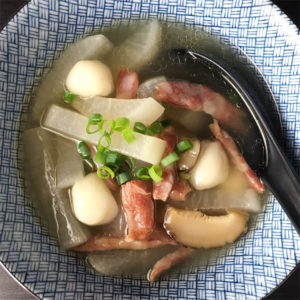 While Broth Is Simmering: 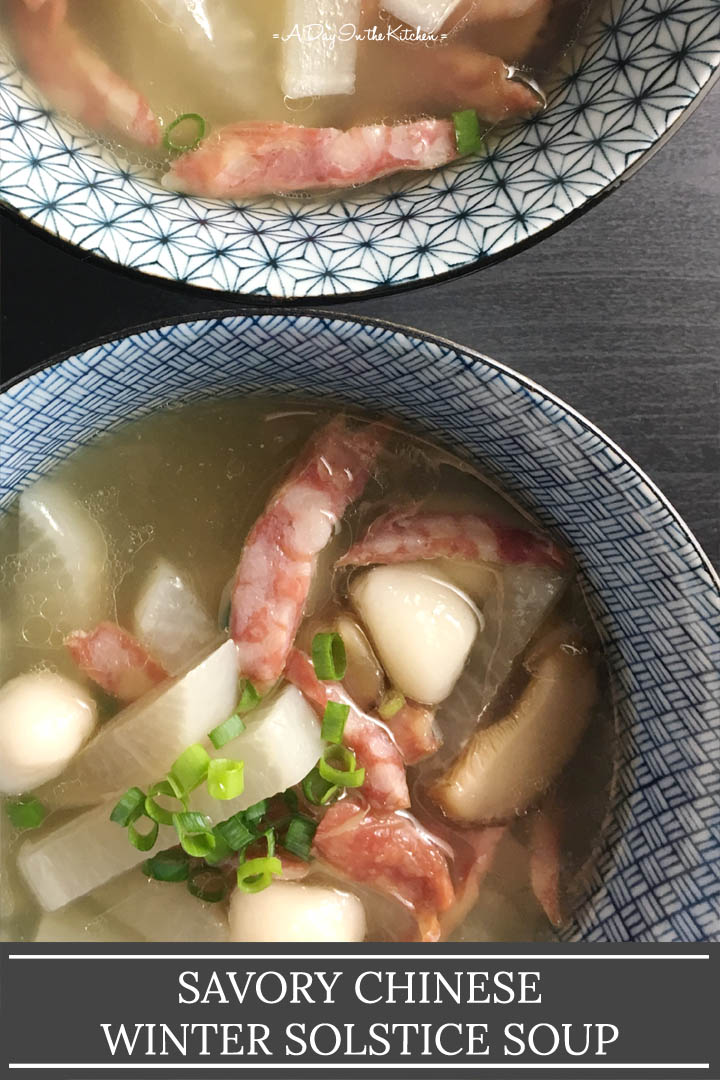