Recently, I got to enjoy the fun of being a tourist in my own city (something I highly recommend that you do, no matter where you live!)! Hong Kong Foodie Tours, as you can probably guess, takes its guests on walking tours through some of Hong Kong’s most known areas, all the while noshing on tasty nibbles.

A foodie tour…there couldn’t be a more perfect tour for me, don’t you think??

I have been living in Hong Kong for just about 6 years now….SIX! And while I think I’ve made a decent scraping of the surface, I know full well that I have not yet seen all there is to this amazing cultural world city we live in. One of my favorite things to do is to simply wander and see what I stumble upon!

Well, Hong Kong Foodie Tours is great in that they offer guided wandering! They introduce visitors to some of Hong Kong’s most iconic foods at venues most tourists would not find on their own. I was lucky enough to win a free pass to their newest foodie tour offering, the Temple Street Night Market Tour and I was thrilled to be able to participate!

Our tour guide was Jamie (forgot to get a photo) who was actually born in England, but raised in Hong Kong. So despite not looking like a Chinese local, he was very well-versed in the culture, the food, and language! I was impressed! 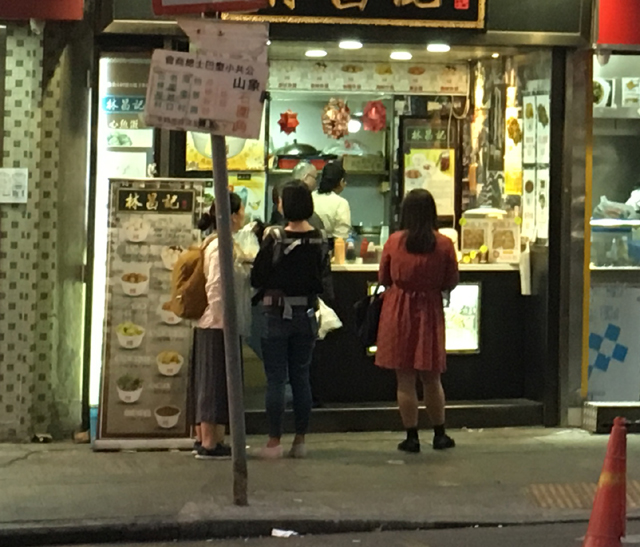 Part of this shop’s popularity with locals centers around all orders being fresh-cooked. So there’s no big tray of siu mai in a display out front, being kept hot. Who knows how long they’ve been sitting there? At this shop, they don’t cook the food until you place the order!

Another claim to fame is that they aim keep the FISH in their fish balls! Containing mostly fish as opposed to starchy fillers, you can definitely taste the difference in their siu mai and fish balls. Drizzle them with some chili or curry sauce and you’ve got fresh and tasty food. 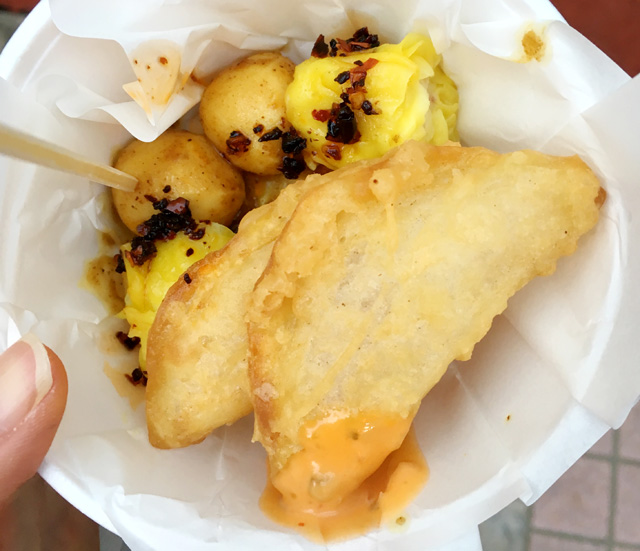 As an added bonus, we also got a sort of fish fritter…the same fish meat as what’s used in the fish balls, but battered and fried because…why not??

It, too, was really good – crispy crunchy batter and tender fish filling inside. It was a great sampling of what this place offers, and it was a great start to the tour!
After enjoying our first sampling and getting a brief history of the shop and the area, it was time to move on... 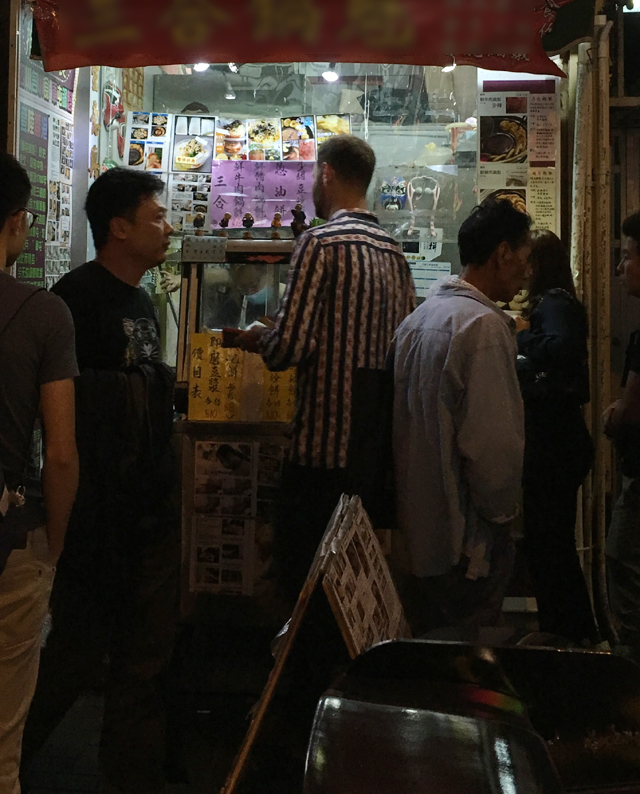 While not specific to Hong Kong, this shop was all about Sichuan pancakes, and judging by the crowd out front, they are a popular item for the locals who know about them. 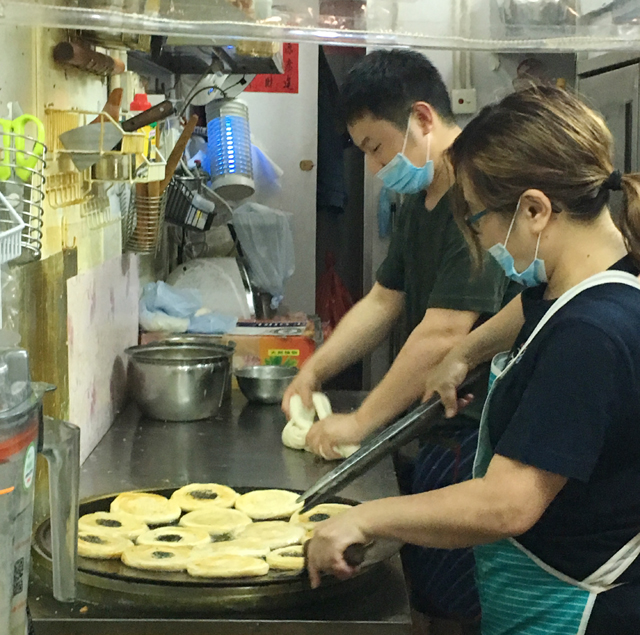 Inside, there was a two-person team, juggling tending to customers and making and cooking the pancakes. 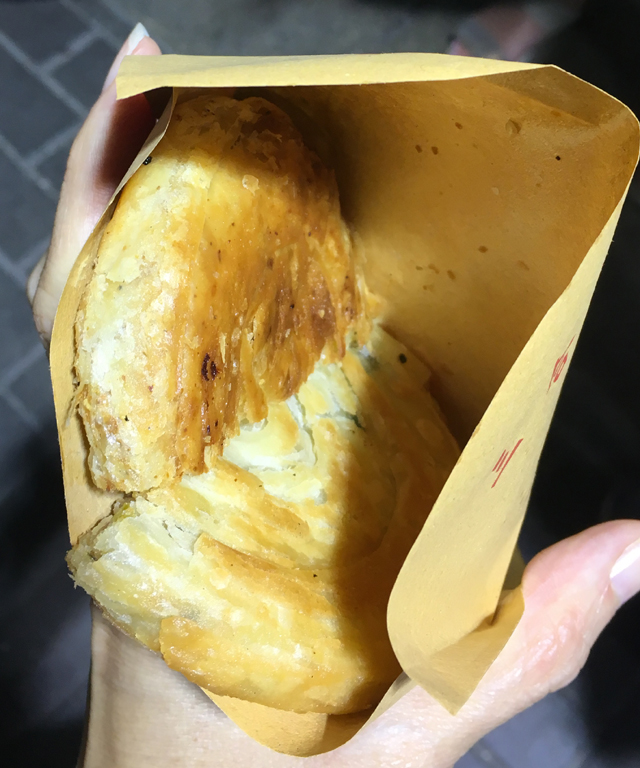 I’d never had a Sichuan pancake before and didn’t really know what they were like, but after this stop, I was hooked! 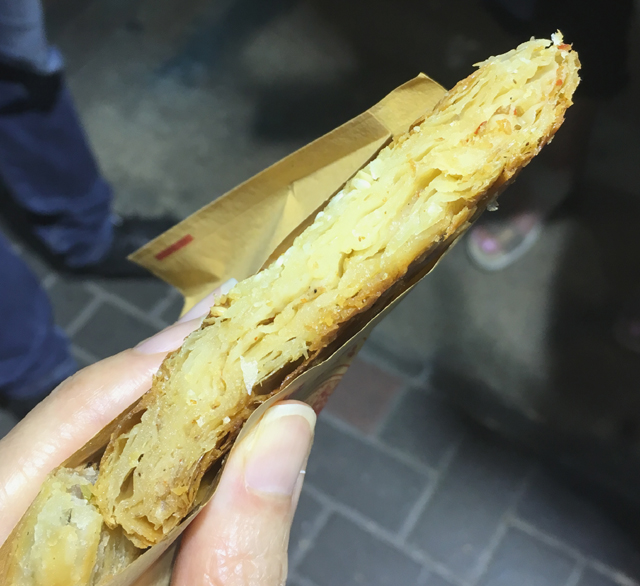 They were crazy crispy on the outside, with loads of amazing layers on the inside. And tucked into all those layers were flavorings that you couldn’t quite see, but you could definitely taste. WOW.

I devoured my pancakes pretty quickly. In fact, I think I might have snarfed them up before anyone else was finished!

And with that, we were off to the next stop! 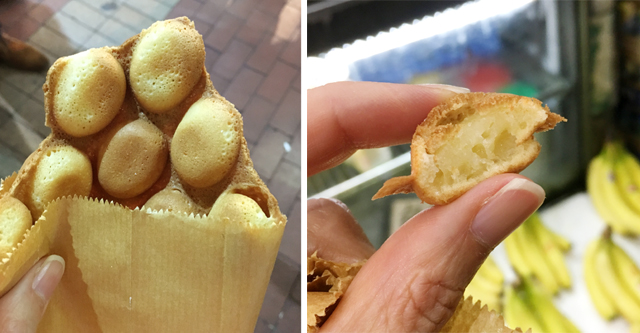 Another street food tied to Hong Kong? Egg puffs. There is no shortage of stalls or shops that sell them.

But I have to admit that this particular place we went to had the best egg puffs I’d ever had. Crispy on the outside and chewy on the inside, down to the very last puff in the bag.

Even better, each puff ball wasn’t just an empty shell. Each one had a nice amount of dough inside, giving it a nice chew and making it more substantial than simply biting into air. So good!

The man operating this stall works in a space so tight, all he needs to do is rotate in one spot to access everything. And it’s not as if he has his own brick-and-mortar shop. He actually rents out a small space from a larger Asian shop selling herbs and grocery items. He just has enough space for his waffle iron stand and himself!

After dumplings, pancakes, and now egg puffs, I was already getting full …but we weren’t done yet! So on we walked to try and burn off a few calories to make room for our next treat! 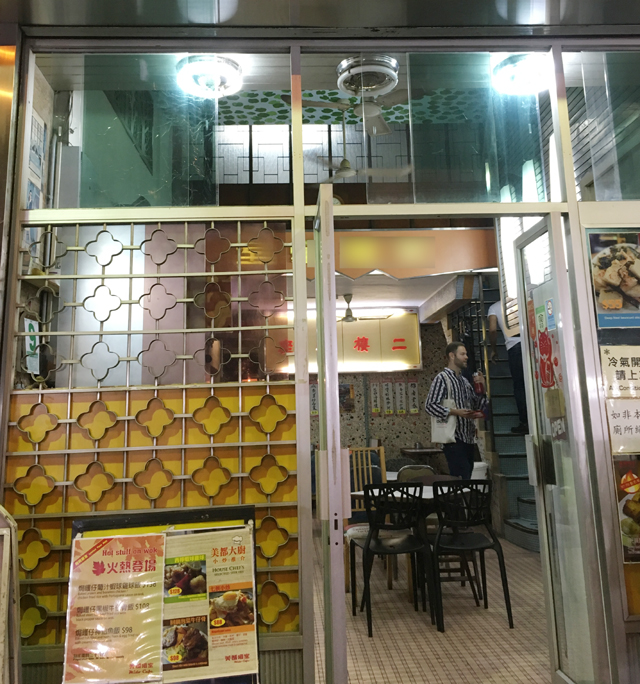 Our foodie tour took us to a classic Hong Kong café next, built in the 1950’s and still existing to this day. While I do not know if any of the interior has been restored, it pretty much has the look and feel of a café from that decade.

We went upstairs and sat down (our first “sit-down” snack of the evening), and were served deep fried wonton skins with Hong Kong style sweet and sour.

Normally, if you think of deep fried wonton, you think of crispy pork or shrimp stuffed wonton, being served alongside a drippy sweet and sour sauce.

This café, however, serves it up “traditional Hong Kong” style. The deep-fried wonton wrapper skins have no filling, and are served alongside a bowl of sweet and sour “stew”, for lack of a better word. The sweet and sour is filled with chunks of onions, bell peppers, pineapple, squid, and pork. What ever filling is missing from the wontons, you get in the sweet and sour which you pile onto the wonton before taking a bite.

I guess you could say the wontons are acting like a tortilla chip, and the sweet and sour is the “salsa”! 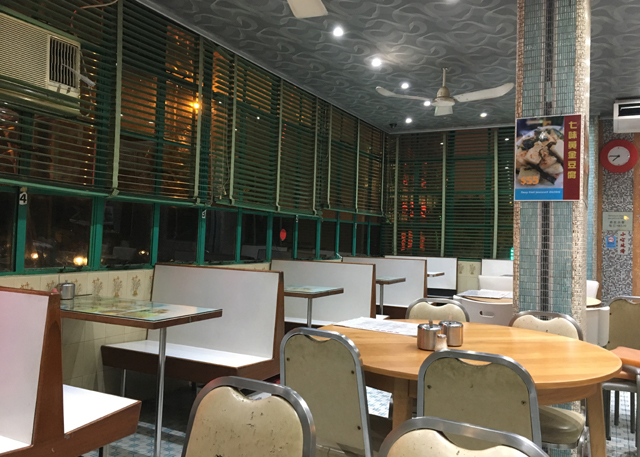 Even though the restaurant setting was very retro and cool, I have to say that the sweet and sour was my least favorite of the dishes we ate on the tour. While it wasn’t bad, sweet and sour isn’t really my thing, Hong Kong style or not, and I found the wonton skins too oily for me.

That all being said, I think this particular visit on the tour is more about going for the atmosphere and getting the feel of what a Hong Kong café in the 1950s was like, and that, in itself, was worth a stop.

From there, we headed towards the Temple Street Night Market area where we stopped for a much welcome refresher…cold chrysanthemum tea! 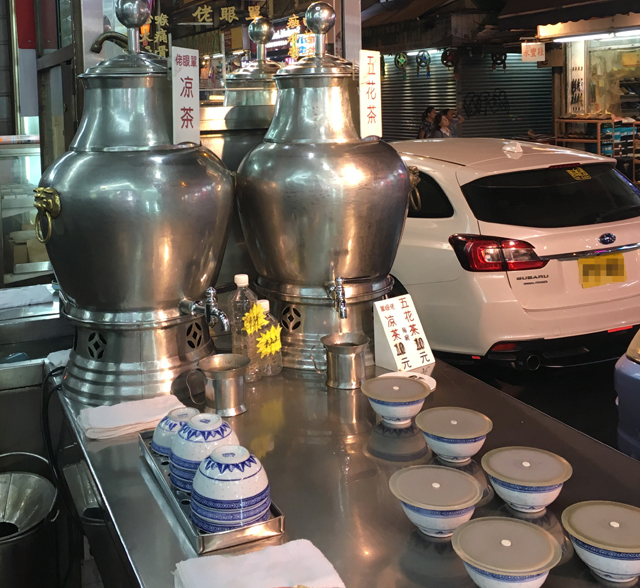 Tea shops such as the one we went to can be spotted by their bowls of tea set up on a counter or table at the front.

(Unfortunately, I forgot to get a photo of the actual tea which is served in a small bowl. I guess I was really thirsty and completely forgot about it!)

The cold chrysanthemum tea hit the spot after the foods we’d eaten so far. I knew immediately what kind of tea it was once I tasted it since my mother used to make chrysanthemum tea for us ALL THE TIME! A cool refreshment with a touch of nostalgia...this was a very nice stop for me in more ways than one.

After a quick stroll through the Temple Street Night Market, breezing past all the goods for sale, our tour culminated into our final stop for the evening, a seafood restaurant where we got to enjoy a late sit-down dinner. 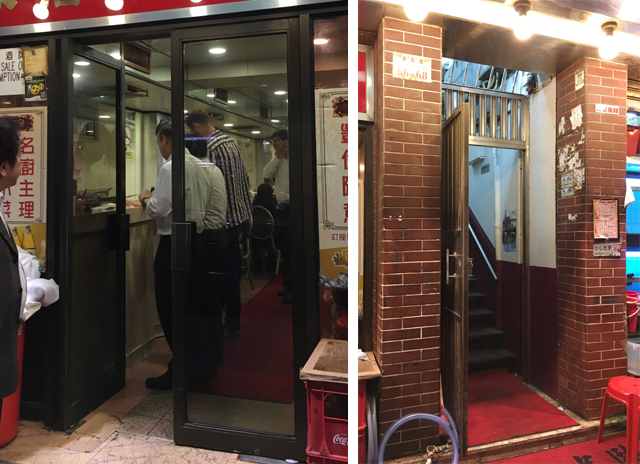 This restaurant had their main dining room off the street, but we sat in another room upstairs, accessed by a staircase that didn’t look like it was part of the restaurant…but it was! You never know what’s up these dodgy looking stairwells!

After nibbling on some peanuts and sipping on some beer and tea, it was time to eat…again!

First up were black bean clams…another nostalgic dish that made me think of how my mum used to make them when I was younger. These clams were really tasty with the saltiness from the black beans, and a bit of chopped chili pepper thrown in for spice. 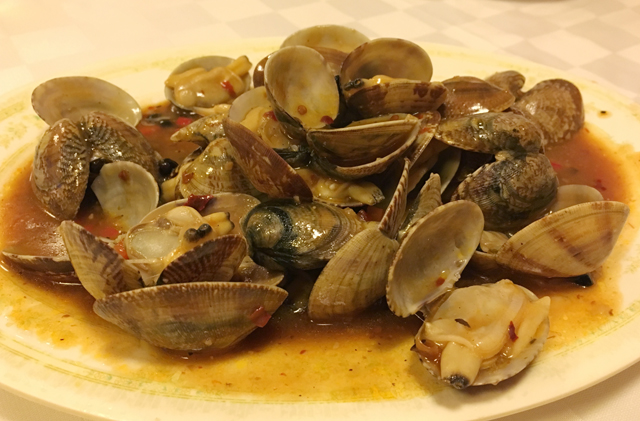 Next up…deep fried salt and pepper squid! The squid was lightly battered , fried with some chopped chili peppers, and served with "geep-jup", which I know sounds like "ketchup"...but it's not. It's actually Worcestershire sauce! Who'd a thought, right? 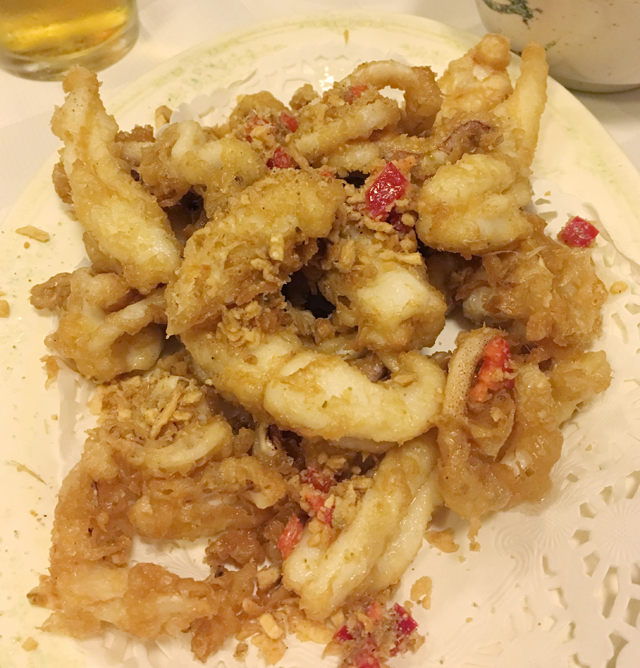 Then came crispy chicken! It was slightly different than what I have always known to be crispy chicken, but that being said, I enjoyed it quite a bit. The chicken had crispy salted skin and tender meat cooked to perfection. It was served with a fermented bean curd dipping sauce (another very Chinese type of sauce and flavor) which I found quite tasty. It was a great non-seafood dish in the seafood restaurant! 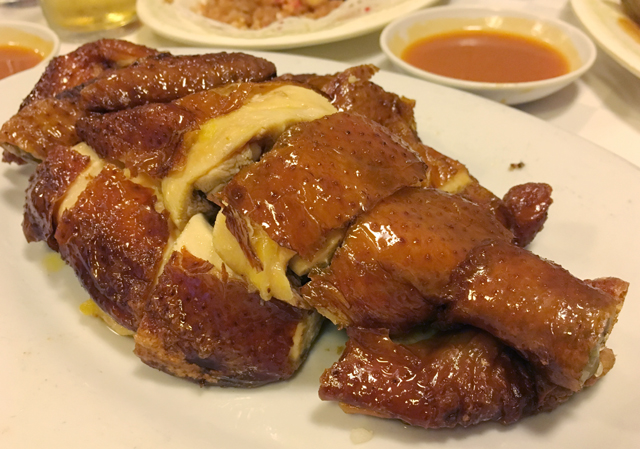 We thought we were done, but the restaurant offered us complimentary dessert..red bean soup! (Again, I forgot to get a photo, but if you’re Chinese, you already know what this is all about!) It’s a very traditional Chinese way to end a meal, and the soup itself was mildly sweet and had some taro root chunks mixed in. I thought it was nice…although I’m not sure if the soup was much of a hit with the others in the group who weren’t quite sure what to make of it!

As I mentioned at the start, I was really looking forward to participating in this foodie tour, and I was not disappointed. I found the tour to be very well done, covering a good variety of foods and venues that most visitors to Hong Kong would not necessarily experience. Jamie was also a great guide! He was knowledgeable and entertaining and engaging, and it was awesome being able to relate to so many things he mentioned.

Even though I grew up learning many things about Chinese culture and food and customs, and I’ve lived here in Hong Kong for 6 years, I am, by no means, an expert. I enjoyed learning new things on the tour and I also liked being able to share my personal familial experiences with the other guests.

If you are visiting Hong Kong and are interested in checking out the local food scene, all the while learning a bit about Hong Kong history and Chinese culture, check out Hong Kong Foodie Tours. And if you happen to live in Hong Kong, you may just enjoy one of their tours, too! I certainly did! They have four tours, each covering a different neighborhood, each sampling a different variety of foods.

P.S. This post is not a paid endorsement and I was not compensated for the review. I just wanted to share the great experience I had on a day out with Hong Kong Foodie Tours in case you might be interested in trying them out! 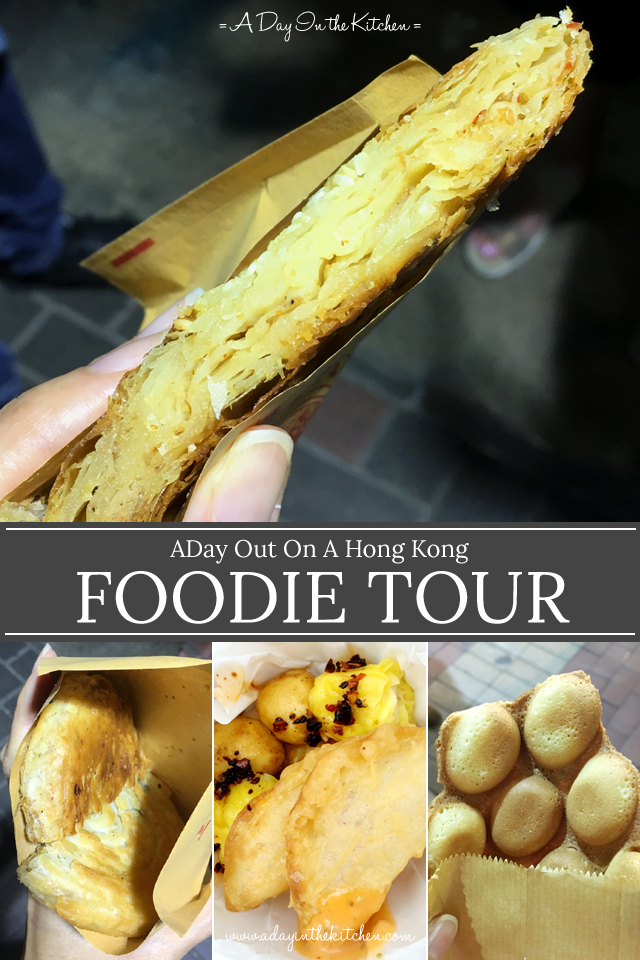